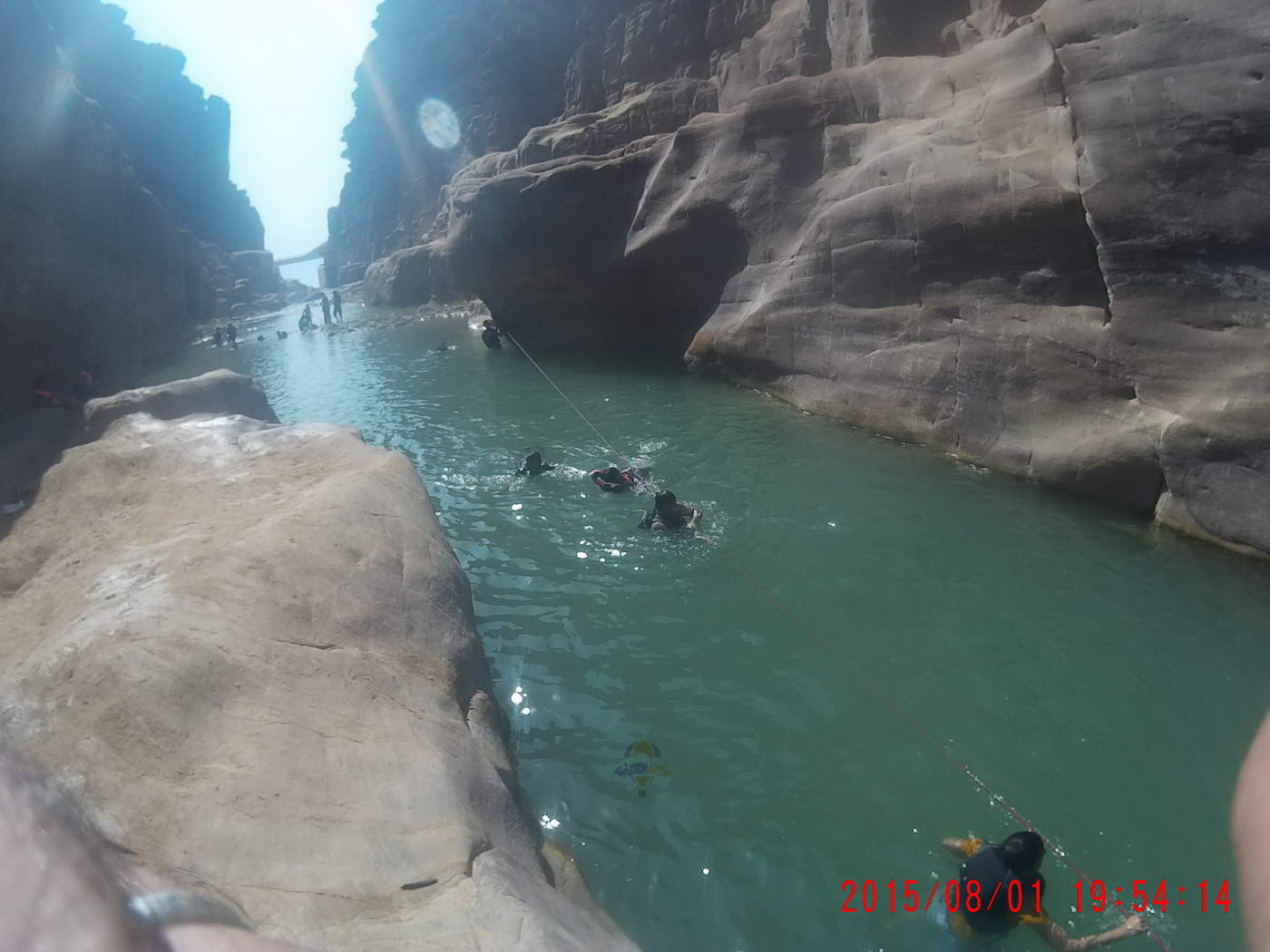 Wadi Mujib is located in Jordan, and it is one of the Jordanian tourist destinations, and it is a narrow corridor that intersects with the Dead Sea. The area of ​​the valley on the eastern side of the shore of the Dead Sea is 220 square kilometres, and Wadi Mujib is known as (Wadi Arnoun). Wadi Mujib is characterised by its amazing and picturesque landscapes, as it occupies a privileged position to attract visitors and tourists, who enjoy its atmosphere. The valley contains 412 species of plants and 50 species of animals. It is also considered a theatre for migratory birds, and the area is a fun place for amateur fishermen.Wadi Mujib, or the Arnon Stream as it was known in biblical times, has always been an important boundary-line. 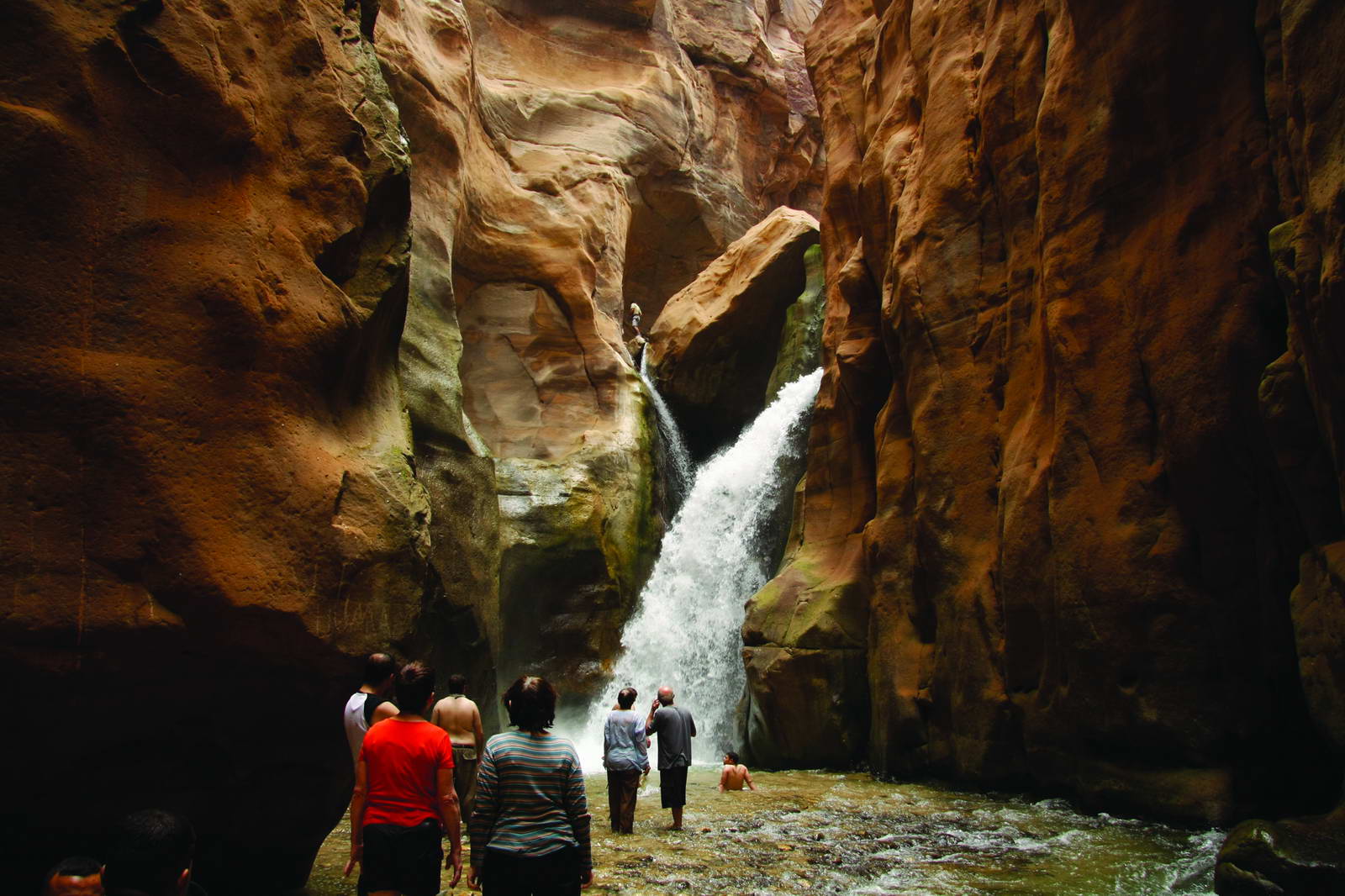 Archaeologists have identified Wadi Mujib as an area inhabited since the Chalcolithic. During antiquity, the Mujib Valley served as a major geographic and political divide between the kingdoms of Moab and Ammon. The area is classified as a commercial spot for salt and oil while today's villagers rely on agriculture as a source of income.This beautiful valley was described in the Obelisk of Mesha, and in the books of al-Idrisi. Wadi Al-Mujib includes many important monuments dating back to timeless times and civilizations. The entrance to the valley is protected by two square-shaped towers. In the modern era, a dam bearing his name was erected on this valley. Important dams in the central region of Jordan. Wadi Mujib includes Nabatean monuments and a Roman fortress, and two square towers protect the entrance to the valley.

King Mesha wrote on his obelisk, “And I paved the road in Wadi Mujib.” The Romans paved it with stones, put stones on the sides of the road, and erected castles and military garrisons to protect it and the caravans that were passing through it.

Al-Idrisi wrote, describing Wadi Al-Mujib, We pass between the two divisions of a mountain called Mujib. It is a valley of great bottom and passes between these two peoples. And they are not so far apart, as far as a person can speak to a person while they are standing on both banks of the river, one hearing the other. The traveller descends six miles and ascends six miles.

This reserve is considered the lowest nature reserve in the world, and is located in the deep Wadi Mujib, not far from the east of the 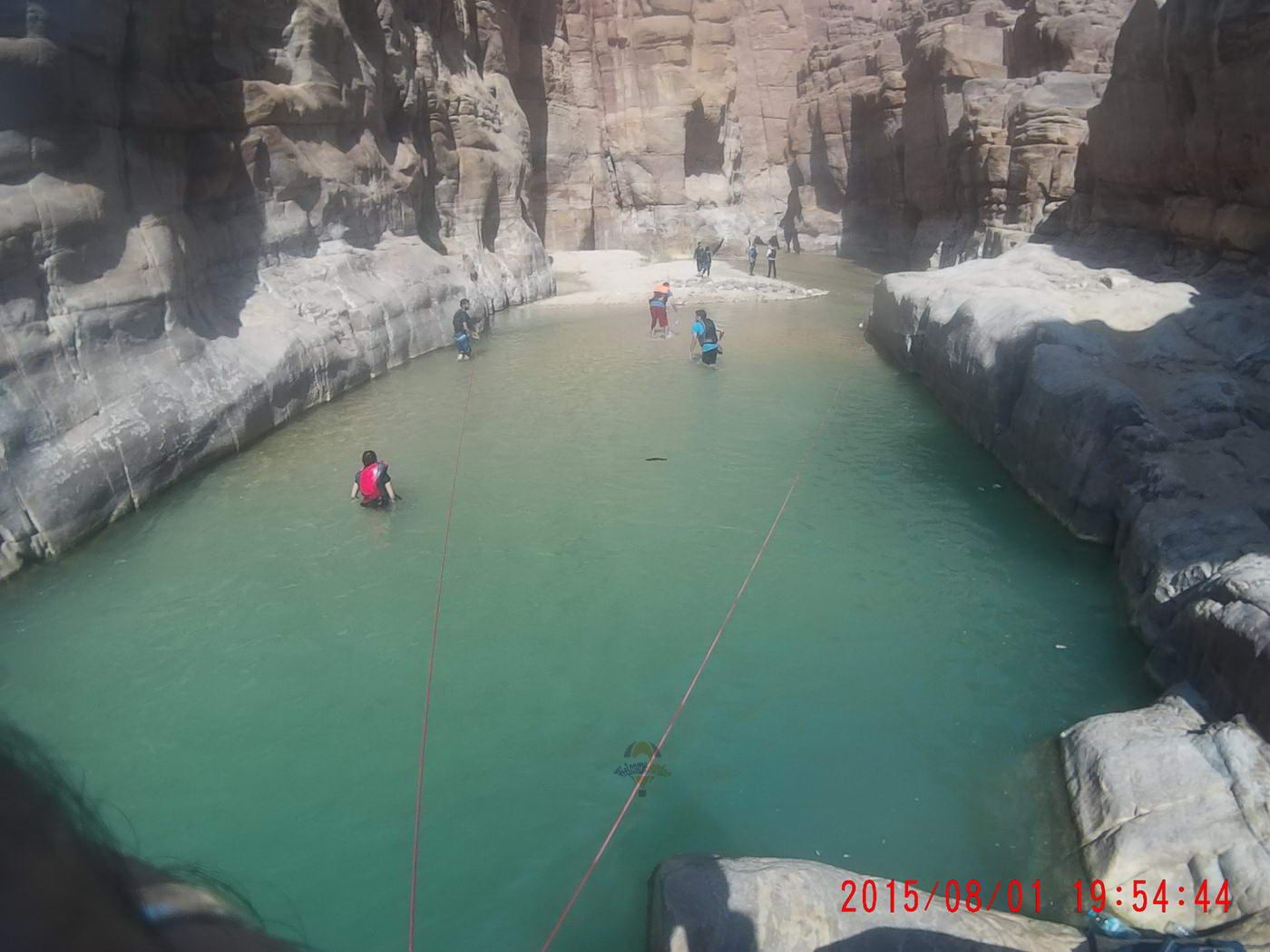 Dead Sea, and at a depth of 410 metres below sea level. The reserve, with its beautiful landscapes, extends north to the Karak Mountains and south towards Madaba, reaching a level of 900 m above sea level in some places. Wadi Mujib has an amazing biodiversity as a result of its elevation difference of up to 1,300 m and the flow of water in the valley throughout the year from seven tributaries. Over 300 genera of plants and ten genera of carnivores have been documented such as the caracal, a medium-sized carnivorous wild cat, and many genera of migratory and non-migratory birds. The reserve is a safe haven for rare species of cats, goats and mountain animals. The sandy cliffs of Wadi Mujib are an ideal habitat for one of the world's most important mountain goats, the Nubian ibex.

There are also several types of birds, such as the Egyptian vulture, the Bonelli vulture, and the Sinai sparrow, which is the national bird in Jordan, as it is one of the most beautiful birds residing in most of the southern regions, especially Wadi Mujib Reserve and the ancient city of Petra.

In addition to the resident birds, the reserve is strategically important as a safe stopover for the huge number of migratory birds that fly annually along the Great Rift Valley between Africa and northeastern Europe.

The Wadi Al-Mujib Nature Reserve in Jordan is one of the largest reserves that were listed by UNESCO in 2011 as a biosphere reserve, and it has become an important tourist destination in the country and a destination for water sports lovers. 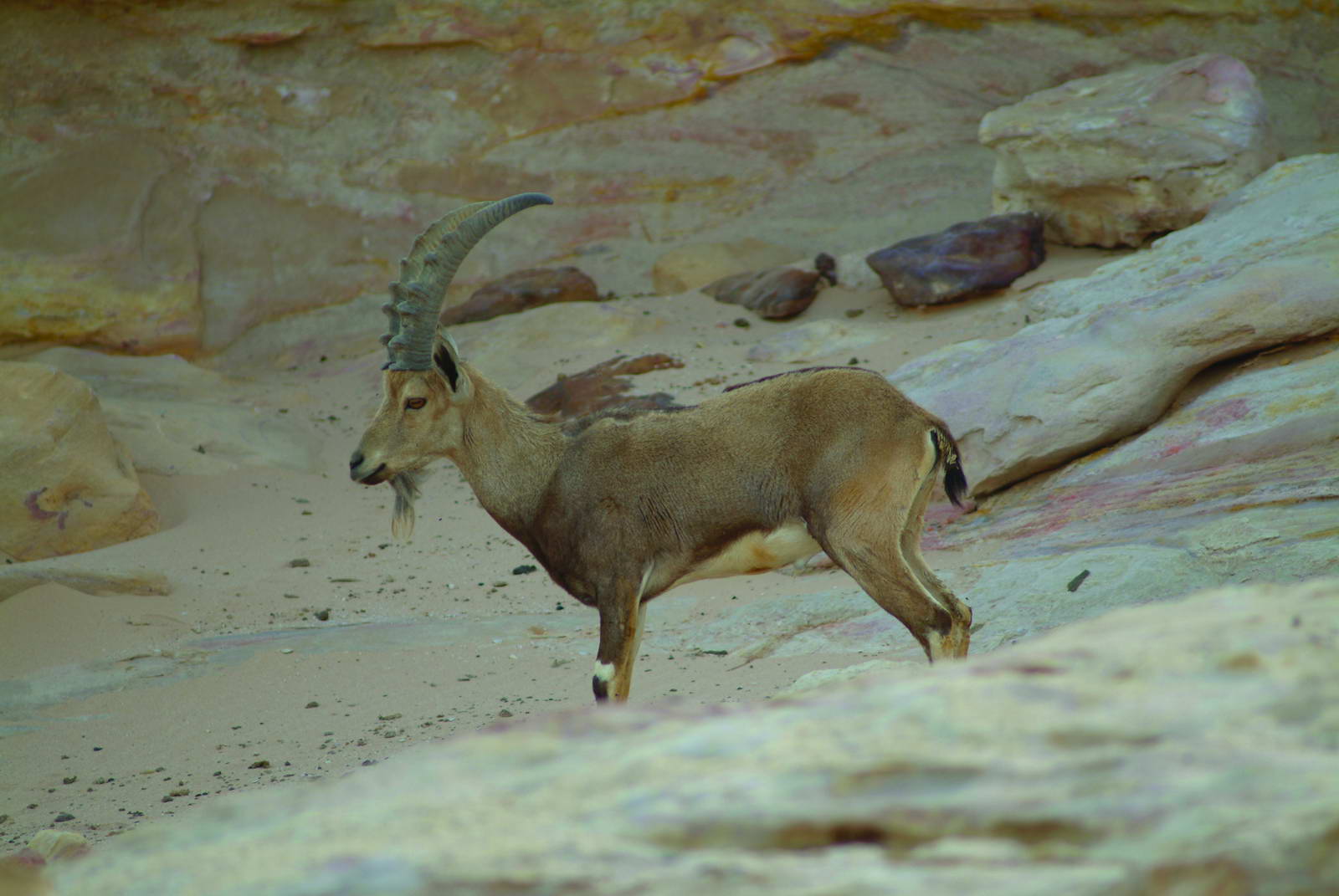 The trail starts at Mujib Adventure Centre as it passes through the funicular, following the path of the river between two large sandstone cliffs, to the base of a large waterfall. Depending on the monsoon levels in that year, the narrow valley may have a deep pool suitable for swimming. The place is perfect for escaping the summer heat and enjoying the shade and the cool water.

The trail starts from Mujib Adventure Center on the Dead Sea Road to the south (starting point). After entering the narrow valley gorge with a short distance, the tourist reaches the top of a stunning waterfall 20 m in height. After descending the waterfall, the walk continues along the Siq trail to the Mujib Adventure Centre.

The route started at Mujib Adventure Centre on the Dead Sea Road, all the way to the south (starting point). The road extends against the current to the point where the Mujib River meets the Al-Hidan River, where the tourist swims in natural pools before descending to a 20-metre-high waterfall, under the supervision of a trained guide. After that, continue along the Siq to the Mujib Adventure Centre.

The trail starts from Mujib Adventure Centre on the Dead Sea Road before descending into the reserve. The trail continues south along the Dead Sea, and a beautiful blue sea landscape accompanies you throughout the journey. After that, the tourist continues the journey, passing through a number of dry valleys and the Raddas station, where he may encounter the Nubian caribou "Al-Hud". The place is also famous for containing the rock statue of Lot's wife. After the stop at the station.

From the visitor centre, the trail runs from the southwest to the northeast. The tourist needs to swim from one pond to another until he reaches the end point where the old wheat mill is.

The Mujib Biosphere Reserve provided zip-lining by installing two parallel ropes, allowing two people to glide together. The rope is 100 m long, and the slide is about 9 m long, and runs with the Mujib Bridge from its starting point in the visitor centre all the way to the other side of the valley. 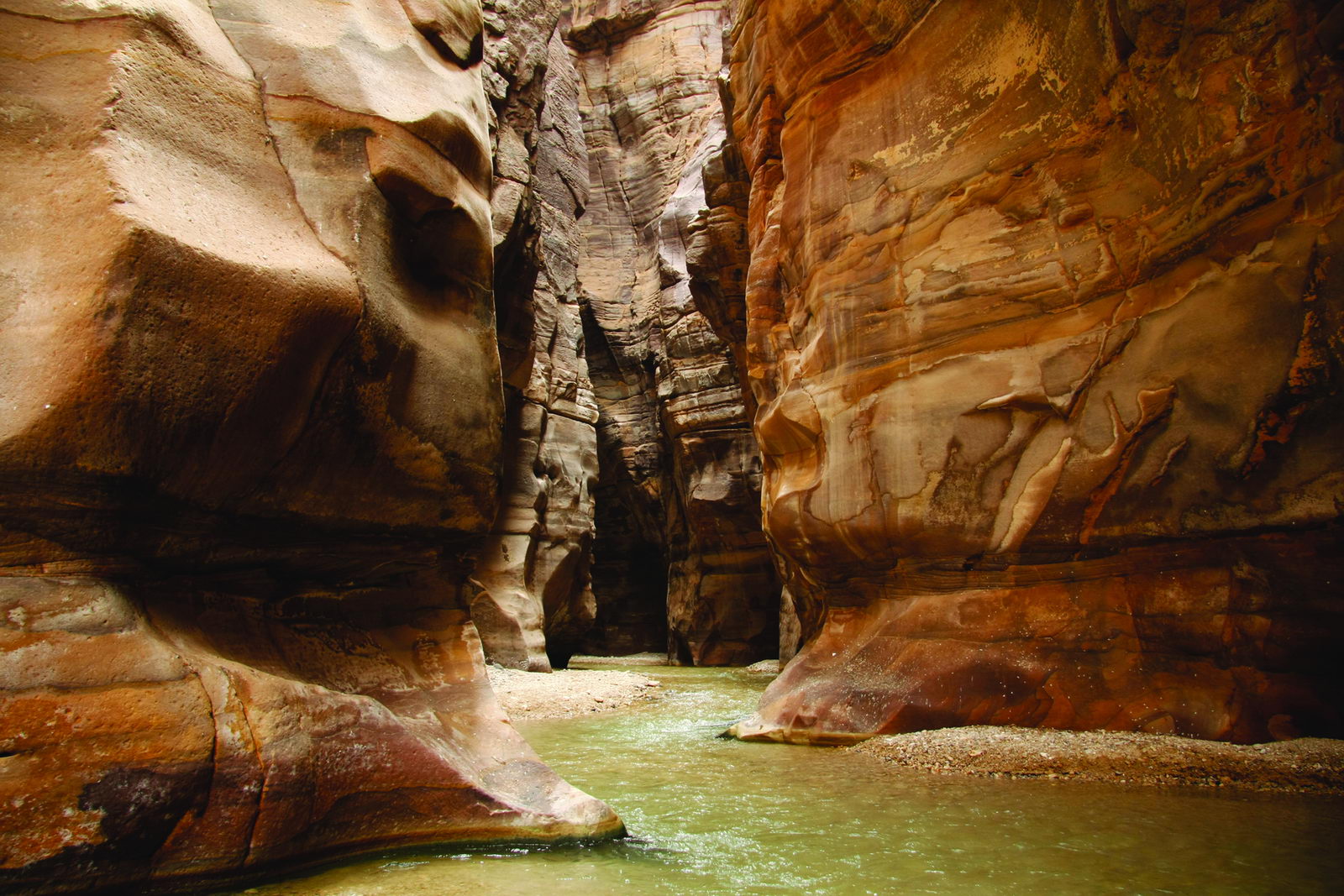 Time: Between 2-4 hours. This varies a lot based on the number of people on the trail and the amount of time you have to wait to climb over waterfalls. It took my group 3.5 hours to hike the trail, but we spent a lot of time stopped and waiting to pass areas.

Difficulty level: Moderate. Lengthwise, it is not a long trail. However, there are difficult technical aspects, such as climbing over 2-3 waterfalls, scrambling, and forging against a river current. You need a sense of adventure and to be somewhat in shape to complete the obstacles.

Requirements: Must be at least 18 years old; know how to swim; have a reasonable level of fitness.

What to Wear on the Siq:

Quick Drying Clothes: whatever you choose to wear, I recommend it be something that can dry quickly and doesn’t hold a lot of water on the trail itself. 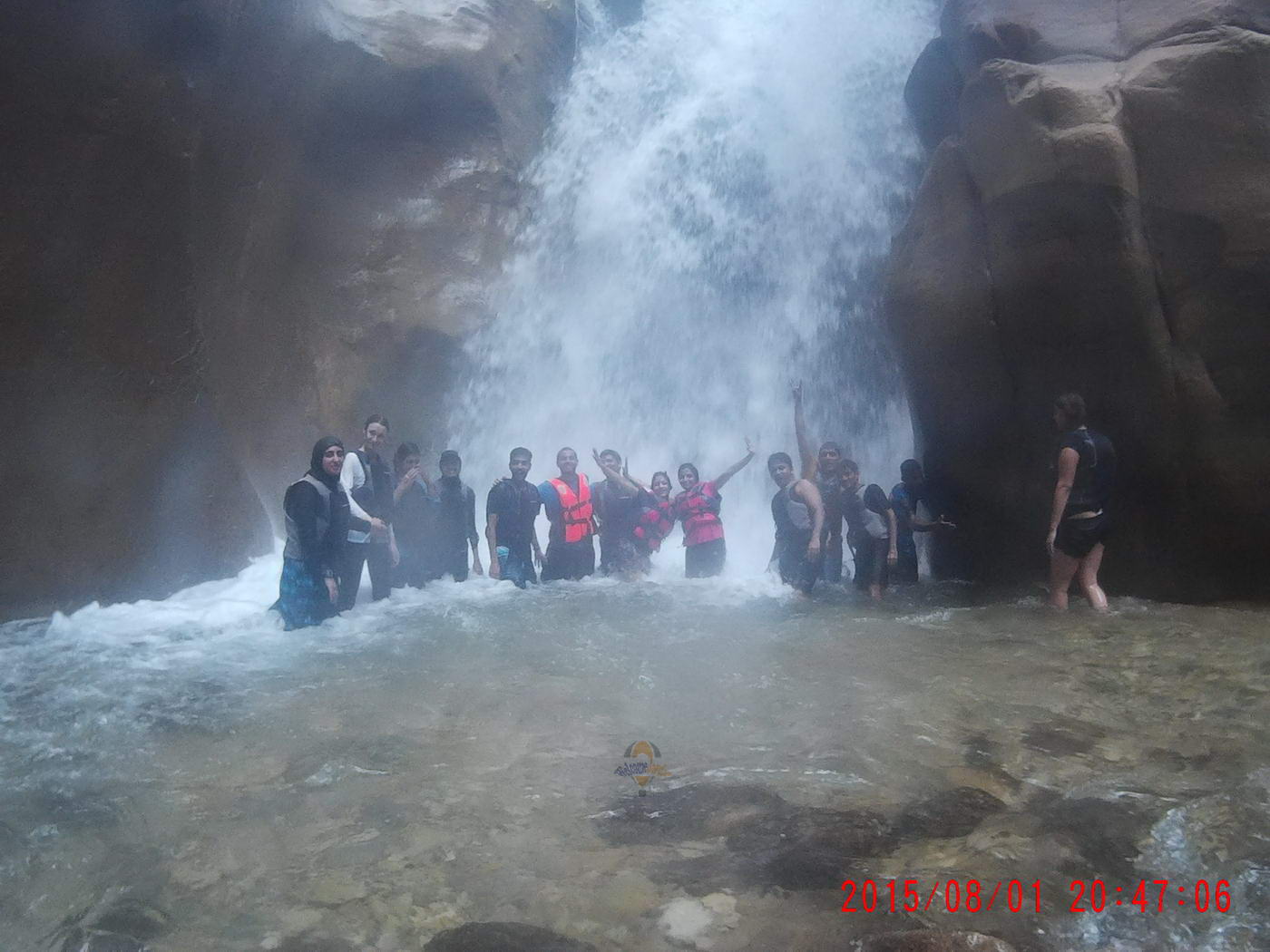 Water Shoes: You will be hiking through a river and your feet will be wet. There are also a ton of rocks on the floor of the river and open-toed shoes are less than ideal. I recommend wearing a closed-toe water shoe for the hike. If you don’t have a pair, you can rent a pair at the entrance for $7. I rented a pair, which were slip-on, closed-toe, and perfect for the hike.

Life Jacket: As I mentioned above, wearing a life jacket is a must for this hike. It is actually required that you wear one for the duration of the hike. You can pick one up at the entrance to the hike and wear it for the duration