Wadi Mukheiris begins sparkling on the northern shore of the Dead Sea, 70 km from the capital Amman, and at an altitude of about 870 m above sea level near the city of Madaba. , extends from the Upper Caritasian period to the depths of the geological time sequences, which reach the rocks of the Cambrian period, about 540 million years ago at a depression of - 428 m on the eastern shores of the Dead Sea.

Mukhiris has a capacity in the heart of the valley that accommodates all visitors, as the width of its floor is about 50 to 100 metres - despite the presence of some narrow passages and the context - but its visit does not spoil the crowds, regardless of their number, from enjoying walking on the floor of the valley, which seems dry in its part. The upper, but after midway it surprises you with the many springs, which extend through the valley’s many drops, to tumble the abundant water in the form of waterfalls, at the bottom of which pools gather that can be used as swimming pools and the establishment of tourist resorts around them. Honour her. 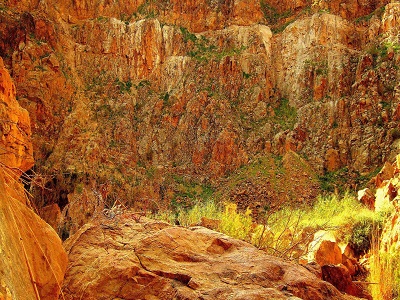 The scene in the valley is different from other valleys, as there are deep channels for several metres and extending for hundreds of metres, in which water collects, and on its sides are terraces that can be walked on or invested as parks or rest areas.

Wadi Mukhiris is a distinctive rocky diversity, where rolling blocks gather from the high on the sides of the middle of the valley sometimes, so you see pieces of limestone adjacent to pieces of sandstone, and others of the rare Burmese rocks that appear in Jordan. Above a plate in the valley, the water attracted a lot of biodiversity, such as beautiful and colourful fish, as well as green frogs and crabs (Abu Janib), including brown and black.

Components of nature in the valley, so you see palm trees that have spread a green bed over large areas of the valley, as well as trees of blink, juniper, buckthorn or dom, in addition to the rare shrubs that can be called medicinal plants, this wild thyme, wormwood and qasim Even al-Haramal, al-Shanan, al-Tayyun, al-Shafallah and many others.Mint and castor bushes exude a sweet smell that refreshes the noses. Focusing on the waterfalls in the valley is very important, due to its large number of more than 30 metres in height, especially the waterfall known as the Mukheiris waterfall.