More Than A Wonder, The city of Petra, capital of the Nabataean Arabs, is one of the most famous archaeological sites in the world, it is Located 240 km south of the capital Amman and 120 km north of the red sea town of Aqaba, is undoubtedly Jordan's most valuable treasure and greatest tourist attraction, and it is visited by tourists from all over the world.It is not known precisely when Petra was built, but the city began to prosper as the capital of the Nabataean Empire from the 1st century BC, which grew rich through trade in frankincense, myrrh, and spices. Petra originally known to its inhabitants as Raqmu or Raqēmō is a historic and archaeological city in southern Jordan. It is adjacent to the mountain of Jabal Al-Madbah, in a basin surrounded by mountains forming the eastern flank of the Arabah valley running from the Dead Sea to the Gulf of Aqaba.The area around Petra has been inhabited from as early as 7000 BC,and the Nabataeans might have settled in what would become the capital city of their kingdom as early as the 4th century BC.Archaeological work has only discovered evidence of Nabataean presence dating back to the second century BC,by which time Petra had become their capital.The Nabataeans were nomadic Arabs who invested in Petra's proximity to the incense trade routes by establishing it as a major regional trading hub.

The Nabateans living and trading in Petra soon accumulated a significant amount of wealth, and an envious Greek Empire attacked the city in 312 B.C. This event marks the first reference to Petra in recorded history. The Nabateans successfully fought back the Greek invaders by taking advantage of the mountainous terrain surrounding the city. The mountains effectively served as a natural wall, buttressing Petra. However, the Greek incursion was not the last time the city would come under attack.In fact, the Romans would invade Petra in 106 A.D., and ultimately forced the Nabateans to surrender. The Roman Empire annexed the newly gained territory and changed its name to Arabia Petraea. They continued to rule over the city for more than 250 years until the middle of the fourth century A.D., when an earthquake destroyed many of its buildings. The Byzantines eventually took control of the region, and governed Petra for some 300 years.

Carved directly into vibrant red, white, pink, and sandstone cliff faces, the prehistoric Jordanian city of Petra was "lost" to the Western world for hundreds of years.Located amid rugged desert canyons and mountains in what is now the southwestern corner of the Hashemite Kingdom of Jordan, Petra was once a thriving trading center and the capital of the Nabataean,The city sat empty and in near ruin for centuries. Only in the early 1800s did a European traveller disguise himself in Bedouin costume and infiltrate the mysterious locale.

Petra has also been referred to as the “Rose City” because of the colour of the stones used in its buildings. It was named a UNESCO World Heritage Site in 1985.

After the eighth century, when Petra was largely abandoned as a trading centre, its stone structures were used for shelter by nomadic shepherds for several centuries. Then, in 1812, the unique ruins of Petra were “discovered” by Swiss explorer Johann Ludwig Burckhardt. He described the ruins of the once-great city in chronicles of his travels.With the western world now aware of their existence, they soon attracted the interest of architects and scholars, among others. Starting in 1929, British archaeologists Agnes Conway and George Horsfield, as well as scholars Tawfiq Canaan and Ditlef Nielsen, launched a formal project to excavate and survey Petra.

When Petra was named a UNESCO World Heritage Site in 1985, Petra Bedouin tribes people who had made homes for themselves within the city’s remaining ruins were forcibly relocated by the Jordanian government.In the early 2000s, the site was named one of the “Seven New Wonders of the World,” leading to a spike in tourism. Since then, efforts have been made to protect the ruins of Petra from heavy tourism, as well as damage from floods, rain and other environmental factors.

The Top Things to See in Petra:

Start at the Obelisk Tomb and Bab Al-Siq Triclinium

A triclinium is a dining room widely used in Antiquity with three benches (or sofas) on which the guests reclined while feasting. In Petra, more than a hundred such triclinia of various sizes have been found, about a quarter of them in connection with tombs for ritual banquets in honour of the deceased. It also neighbours the Egyptian-influenced Obelisk Tomb.

It is the ancient main entrance leading to the city of Petra, starts at the Dam and ends at the opposite side of the vault, a split rock with a length, most of the rock is natural and another part was sculpted by the Nabataeans. The Siq, the main road that leads to the city, starts from the Dam and ends at the Treasury.  It is a rock canal, The main part of the Siq is created by natural rock formation and the rest is carved by the Nabataeans.At the beginning of the Siq, one can still view the remains of the city’s gate. On both sides of the Siq, there are channels to draw water from Wadi Musa , from outside the city to the inside. Look out for the cobblestone canals while walking in the Siq Whether you are passing by on foot, cart or camel, you will see typical petra formations with exotic appearance on your 1200 metre journey. The Nabataeans were the architects of their day, carving aqueducts, dams, and outlets into the rocks.

Before your walk through the Siq has come to an end, the famous Treasury will start emerging bit by bit from behind the rosy rocks. When coming face-to-face with the 43m-high monument, you will immediately feel dwarfed. Al-Khazneh was carved in the first century as a tomb for a Nabatean king and later used as a temple. Unfortunately, you are not allowed to enter the Treasury for fear of wreckage.Seeing the Treasury in daylight is an overwhelming experience, but paying it a night visit will lift you into another magical dimension, as hundreds of candles are illuminated to guide your path through the Siq and to the glorious Treasury.

The High Place of Sacrifice

The spectacular view of Petra down below seen from the High Place of Sacrifice is worth taking each of the many stone steps leading up to it. You will be standing tall on holy ground, where the Nabateans used to hold religious ceremonies honouring their gods.

It is by far the largest of the Royal burials and was later to be reconsecrated as a Byzantine church. There are three chambers above its doorway. The central chamber is blocked by a stone that depicts the man buried inside.

The Arabic name "Ad Deir" (the Monastery) was given to the place by native Bedouins because of the crosses inscribed on the interior back wall during its Christian use in Byzantine times. The monument's façade of 47 m width and 48 m height, and the large hall behind it were carved out of the mountain around the mid-1st century AD.

What kind of animals we might use at Petra, and how often do we need to use any?

​ Petra is a huge site, and you will get the chance to ride on different stages at Petra according to your desire and ability to walk:

You may take a carriage from Petra visitors center till the Treasury ( 3 km - cost 25 ​ JD for 2 ​ including the way back at the end of the day ) ,

You may take any, according to the same order during your way back to the visitor's center. 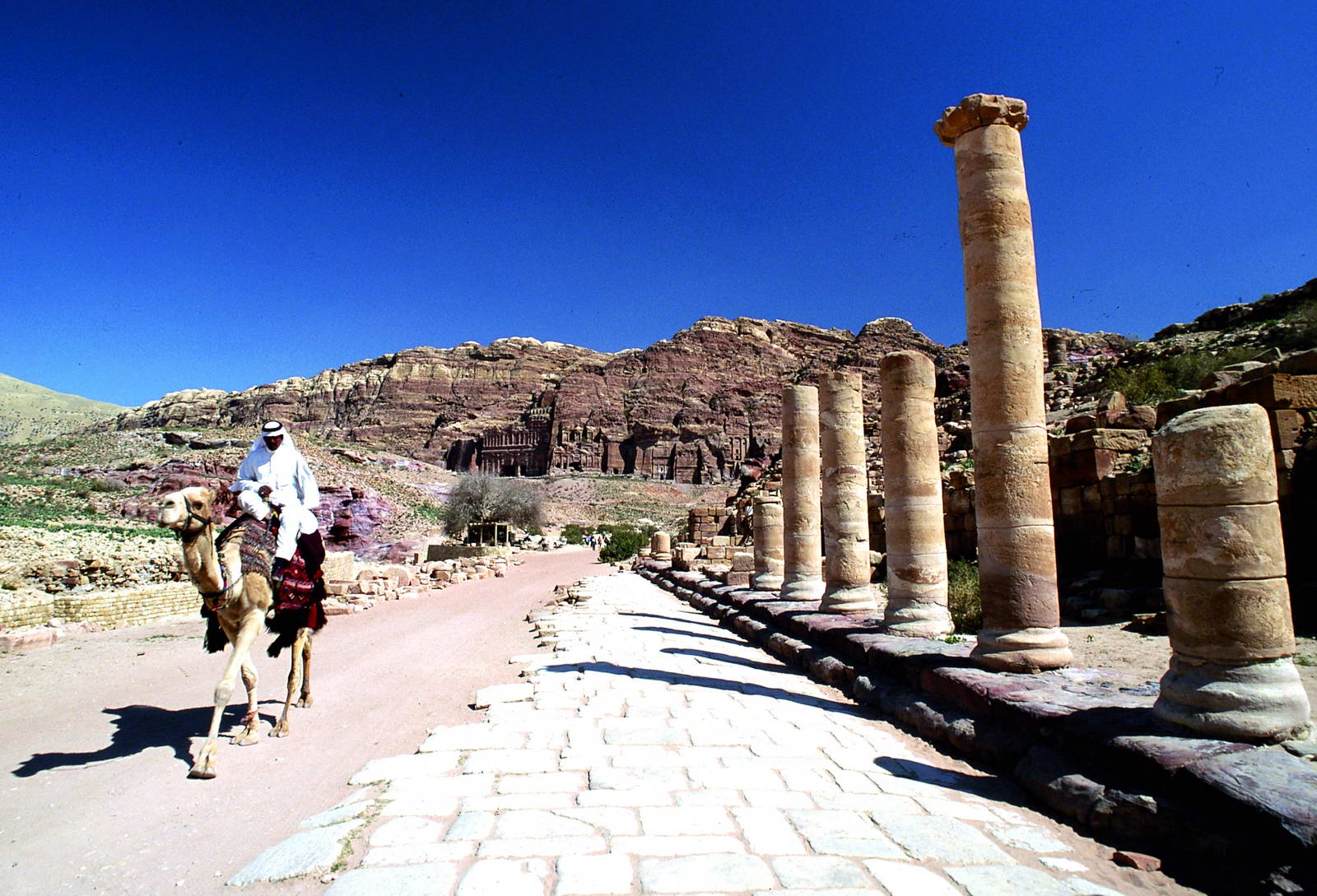 Are there specific days to do Petra at night - Petra by Night ? How much does it cost?

Petra by night is  every Monday, Wednesday & Thursday, starting at 20:00. You can buy the ticket there for 17JD/P

Petra Entry fee is 71 US$/P or 50 JOD For one Day - Included in Jordan Pass (Wanderer) If you purchase it.

86 US$/P or 6o JOD Three Days visit - Included in Jordan Pass (Expert) If you purchase it.