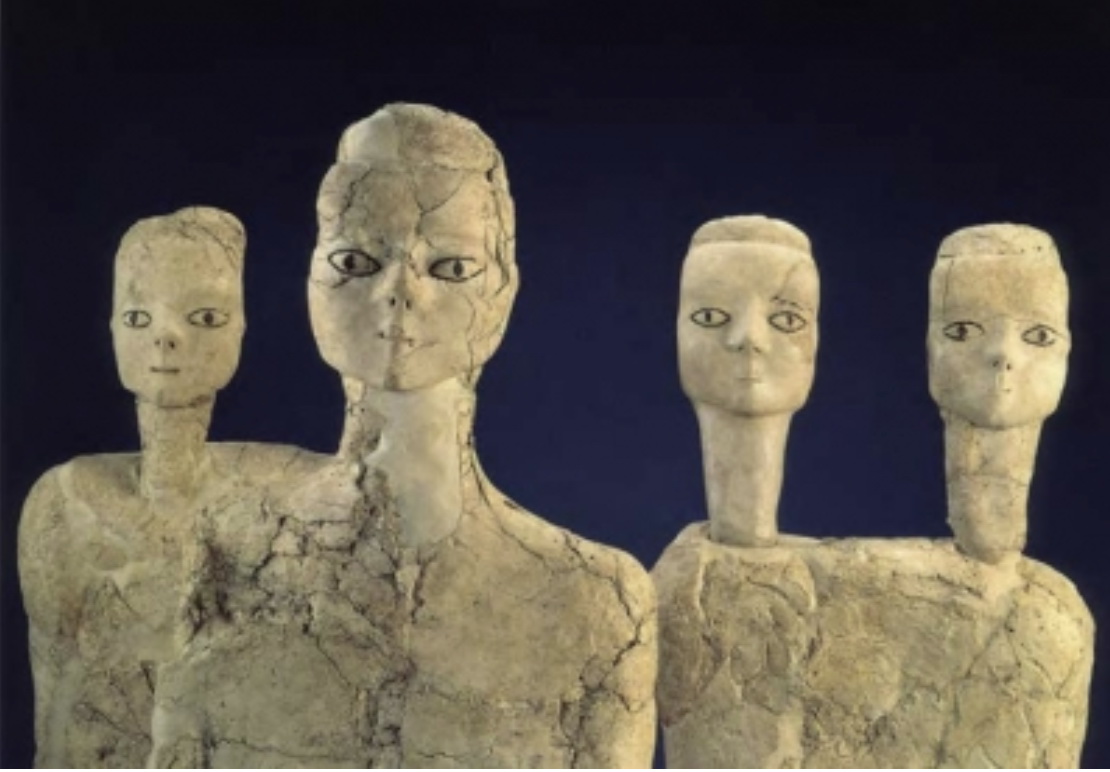 Palaeolithic to sedentary food-producing villagers in the Neolithic. Throughout the EP, societies undergo dramatic changes in Jordan  social organization, technology, economy and ideology. Most notably, we find in Jordan the first domestic animals (dogs), formalised cemeteries, early semi-sedentary sites, and the appearance of mega-sites where large groups congregated repeatedly. These mega-sites became significant places in the landscape fundamental to the establishment of later Neolithic farming villages scattered throughout Jordan.

Epipalaeolithic groups in Jordan are known for producing small (microlithic) stone tools formed into a variety of shapes and hafted into multi-purpose composite tools. They subsisted on hunted game, wild plants and, more rarely, aquatic resources. The period in Jordan can be divided roughly into three phases; Early, Middle and Late. However, within each phase several localised industries are known. The most well-known of these are the Kebaran (early), characterised by narrow micropoints and obliquely truncated bladelets; the Geometric Kebaran (middle) with a shift towards the production of geometric microliths, especially trapeze/rectangles; and the Natufian (late) identified by high frequencies of lunates, along with arched and straight-backed bladelets and microburins (specialised by-products of bladelet segmenta 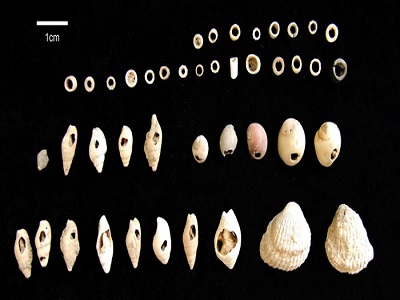 EP sites are found throughout Jordan; however, the nature and density of occupation changes over time. Our knowledge of settlement and society during this period in Jordan comes from two primary sources: intensive regional surveys in Wadi al-Hasa, the Azraq Basin and Black Desert, Wadi Ziqlab, Wadi al-Hamma, and southern Jordan, as well as excavation at several sites within these study areas

In the Early EP in Jordan small sites are found in caves or rock shelters and in open-air settings of western Jordan and the Azraq Basin. Sites such as Tor al-Tareeq and Ayn Qasiyya were likely tied to large permanent lakes supported by the wet climate of the Last Glacial Maximum and groups took advantage of the varied wildlife that flourished at these ‘oases’. In addition, the region’s first mega-sites appear in Jordan in the early EP. Kharana IV and Jilat 6 are anomalous because of their size –each covers ~20,000 m2– and their incredibly high densities of lithics, fauna, groundstone and pierced marine shells . They also document hut structures, hearths, living floors and burials. At Kharana IV, differences in tool technology between phases indicates that several groups occupied the site over thousands of years; while cementum analyses of gazelle teeth from layers within the same phases indicate that site occupations likely extended over multiple seasons. 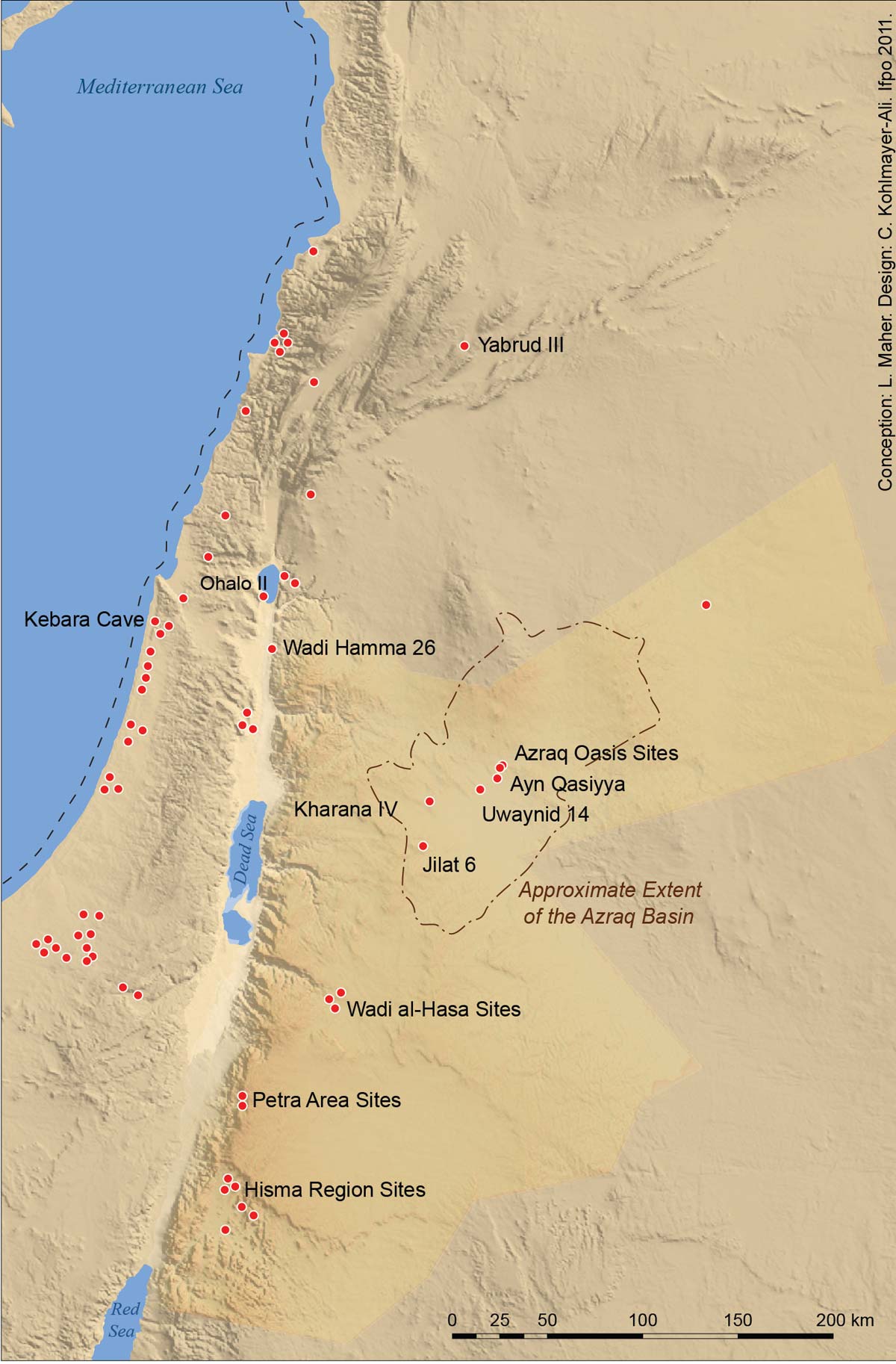 In the Middle EP sites in Jordan  are found throughout the country as groups expanded territory and density of occupation. The first burial grounds with complex mortuary treatments, such as at Uyun al-Hammam, hint at the growing symbolic role of animals in social life as seen at later Natufian and Neolithic sites. The mega-sites in Jordan continued to be occupied and base camps were also established in the west. In the Late EP (Natufian) the mega-sites are abandoned, probably due to increasing dry and hot conditions; however, groups in Jordan establish more permanent settlements throughout the region, with stone-built structures and toolkits suggestive of much more intensive exploitation of particular plant resources such as cereals, tying groups to particular locations. At sites such as Wadi al-Hamma 27 we see all the hallmarks of large Natufian base camps, including circular stone structures, high densities of ground stone and plant remains, symbolic and decorative objects (such as a large basalt monolith carved with a geometric motif), toolkit caches, organisation of site activities, and human burials.