The period that historians call Hellenistic period broadly extends from the death of Alexander the Great in 323 BC until the first century BC - approximately 66 to 30 BC - when the Romans gradually took control of the Near East. The term Hellenistic refers to a cultural phenomenon known as “Hellenization” i.e. the extensive dissemination (begun at least two centuries before Alexander) of the Greek language in the Near East, as well as a series of new customs and philosophical, political or religious concepts, which were also new - the Septuagint is an indication of this phenomenon.

Although the influence of Greek culture had been felt in Jordan previously, Alexander the Great’s conquest of the Middle East and Central Asia firmly consolidated the influence of Hellenistic culture. The Greeks founded new cities in Jordan, such as Umm Qais (known as Gadara) and renamed others, such as Amman (renamed from Rabbath-Ammon to Philadelphia) and Jerash (renamed from Garshu to Antioch, and later to Gerasa). Many of the sites built during this period in Jordan were later redesigned and reconstructed during the Roman, Byzantine and Islamic eras, so only fragments remain from the Hellenistic period. Greek was established as the official language, although Aramaic remained the primary spoken language of ordinary people.

The Wars of the Diadochi

With the might of his sword, Alexander the Great carved a uniquely unified empire that spanned over Europe, Asia, and Africa. Upon his death in 321 BC, however, the Empire was divided between his generals (Diadochi = successors): Philip IV who governed Macedonia and the Balkan Peninsula; Seleucus who governed from the Aegean Sea in the west to India in the east; and Ptolemy who governed Egypt and the southern parts of Syria, including Jordan, Palestine, and Lebanon. While Alexander’s three generals were initially committed to the Empire’s unity, they soon engaged in competition and armed conflict to fortify their dominions and expand the territories they ruled. In 306 BC, each general announced himself an independent king over his territory. The conflict was particularly fierce between the Seleucids who established their grip over all of Syria in the Battle of Ipsus in western Anatolia in 301 BC, and the Ptolemaic Kingdom of Egypt.

The struggle between the Seleucid and Ptolemaic Kingdoms over Greater Syria, known as the "Syrian Wars", marked the third century BC. The continuous war between these two Hellenistic powers finally ended between 201-195 BC with the Seleucids’ supremacy over the area. Throughout the struggle, Jordan, being part of southern Syria and given its economic influence and geographical location, remained a strategic conflict zone throughout this competition.

Jordan’s position in the long struggle between the Seleucid and the Ptolemaic Kingdoms is evidenced by several archaeological sites. Gadara (modern Umm Qais) was re-fortified as a border city against the Ptolemies by the Seleucid King Antiochos III around the beginning of the second century BC. He constructed the city wall, named the city "Antiochia Seleukia", and built a temple dedicated to Zeus Nicephorus. The Ptolemies on the other hand, re-founded Rabbat Ammon during the reign of Ptolemy II Philadelphus (283-246 BC) and named the city "Philadelphia".

One of the most important Hellenistic sites in Jordan is Iraq al-Amir, located about 17km west of Amman. The site is dominated by the palace known as Qasr al-'Abd, which is uniquely constructed from megalithic stones and is decorated with carved lions and panthers. It was the home of the Tobiad clan, known as ‘Tyros’. Joseph the Tobiad was tax collector for Syria, Palestine and Phoenicia under King Ptolemy III Evergetes in the second half of the third century BC. In 1993, a treasure of about 1000 tetra-drachmas of silver coins was discovered at Iraq al-Amir, dating back to Ptolemy III. 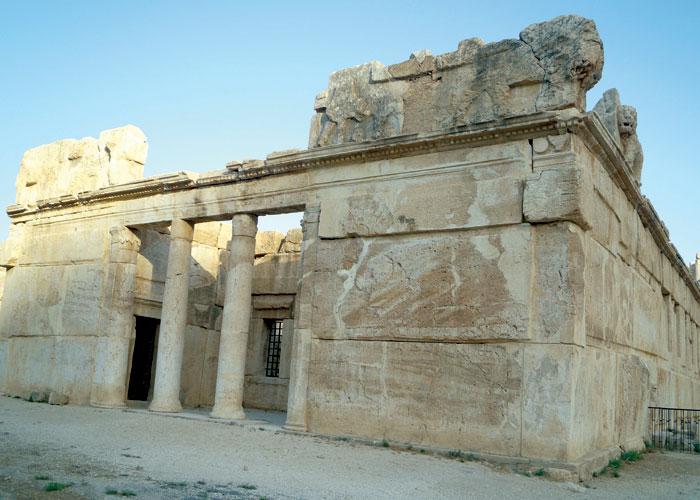 The middle of the second century BC saw the beginning of the end for the rule of the Hellenistic kingdoms. As both the Seleucid and Ptolemaic Kingdoms weakened, the Nabataeans were able to establish their commercial kingdom in the south of Jordan, and the increasing Roman interest in the area finally resulted in the occupation of the lands to the north and west of the Nabataean Kingdom in 63 BC.

Before Alexander’s conquest, a thriving new civilization had emerged in southern Jordan. It appears that a nomadic tribe known as the Nabateans began migrating gradually from Arabia during the sixth century BCE. Over time, they abandoned their nomadic ways and settled in a number of places in southern Jordan, the Naqab desert in Palestine, and in northern Arabia. Their capital city was the legendary Petra, Jordan’s most famous tourist attraction. Although Petra was inhabited by the Edomites before the arrival of the Nabateans, the latter carved grandiose buildings, temples and tombs out of solid sandstone rock. They also constructed a wall to fortify the city, although Petra was almost naturally defended by the surrounding sandstone mountains. Building an empire in the arid desert also forced the Nabateans to excel in water conservation. They were highly skilled water engineers, and irrigated their land with an extensive system of dams, canals and reservoirs.

The Nabateans were exceptionally skilled traders, facilitating commerce between China, India, the Far East, Egypt, Syria, Greece and Rome. They dealt in such goods as spices, incense, gold, animals, iron, copper, sugar, medicines, ivory, perfumes and fabrics, just to name a few. From its origins as a fortress city, Petra became a wealthy commercial crossroads between the Arabian, Assyrian, Egyptian, Greek and Roman cultures. Control of this crucial trade route between the upland areas of Jordan, the Red Sea, Damascus and southern Arabia was the lifeblood of the Nabatean Empire.

In the Hellenistic period, the Nabataeans were already renowned for their business activities. Masters of the routes in the Negev and Sinai, they exported their products to Alexandria and Gaza (the main market for their capital Petra), such as bitumen from the Dead Sea, used in Egypt for mummification and the caulking of boats, and luxury goods (incense, myrrh, balsam and spices) transported by land and sea from “Arabia Felix” (the Yemen), the Gulf and the Indian Ocean. These products were popular throughout the Mediterranean region, and there is evidence of Nabataean traders as far as the West.

The Nabataeans controlled caravan trade along the routes through present-day Saudi Arabia, and trade in the Red Sea through several ports including Aila (Aqaba) and Leuke Kome. These routes were marked by the distribution of: objects with characteristic craftsmanship: painted pottery and lamps; silver and bronze coins; and a particular architectural motif borrowed from the Ptolemaica: capitals which are known as ‘Nabataean’ (plate III.3 to III.5).

Raqmu or  Petra as it was named during the Roman times became the capital of the Nabataeans, and the Nabataeans or the Nomads trippes became merchants overtime taking the advantage of  trade routes coming from Africa crossing Assia to Europe and to the far east - The Nabataeans invested all their wealth and fortune on their capital Raqmu and we can say with no doubt that this was the first Tourist and Worship city designed for this purpose in the world. The Golden period for Raqmu or Petra was from 200BC to 200AD - The Romans occupied the city on the second century AD and they changed a lot on the trade routes that used to come through Petra, later on they started to ship the goods from Africa to Europe through the Mediterranean see and Petra started to loose its fame and fortune, Finally a devastating earthquake strike the area on the 6th century, and the city was abandoned and never rebuilt again and it was lost in history till it was re-discovered to world on the 18th century (that is way it was called the Lost city as well ).