Jordan, officially the Hashemite Kingdom of Jordan, is a country in Western Asia. It is situated at the crossroads of Asia, Africa and Europe, within the Levant region, on the East Bank of the Jordan River. Jordan is bordered by Saudi Arabia to the south and east, Iraq to the northeast, Syria to the north, and Israel, Palestinian West Bank, and the Dead Sea to the west. In the southwest, it has a 26 km (16 mi) coastline on the Gulf of Aqaba in the Red Sea. The Gulf of Aqaba separates Jordan from Egypt. Amman is Jordan's capital and largest city, as well as its economic, political, and cultural centre. 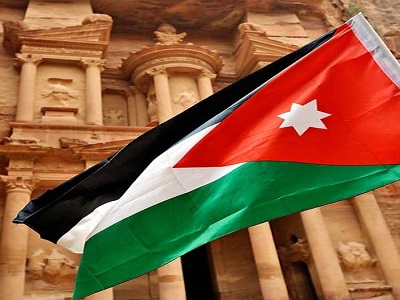 Modern-day Jordan has been inhabited by humans since the Palaeolithic period. Three stable kingdoms emerged there at the end of the Bronze Age: Ammon, Moab and Edom. Later rulers include the Nabataean Kingdom, the Persian Empire, the Roman Empire, the Rashidun, Umayyad, and Abbasid Caliphates, and the Ottoman Empire. After the Great Arab Revolt against the Ottomans in 1916 during World War I, the Ottoman Empire was partitioned by Britain and France. The Emirate of Transjordan was established in 1921 by the Hashemite, then Emir, Abdullah I, and the emirate became a British protectorate. In 1946, Jordan became an independent state officially known as the Hashemite Kingdom of Transjordan, but was renamed in 1949 to the Hashemite Kingdom of Jordan after the country captured the West Bank during the 1948 Arab–Israeli War and annexed it until it was lost to Israel in 1967. Jordan renounced its claim to the territory in 1988, and became the second Arab state to sign a peace treaty with Israel in 1994. Jordan is a founding member of the Arab League and the Organisation of Islamic Cooperation. The sovereign state is a constitutional monarchy, but the king holds wide executive and legislative powers.

Four centuries of stagnation during Ottoman rule came to an end during World War I by the 1916 Arab Revolt, driven by long-term resentment towards the Ottoman authorities and growing Arab nationalism. The revolt was led by Sharif Hussein of Mecca, and his sons Abdullah, Faisal and Ali, members of the Hashemite family of the Hejaz, descendants of the Prophet Muhammad. Locally, the revolt garnered the support of the Transjordanian tribes, including Bedouins, Circassians and Christians.The Allies of World War I, including Britain and France, whose imperial interests converged with the Arabist cause, offered support. The revolt started on 5 June 1916 from Medina and pushed northwards until the fighting reached Transjordan in the Battle of Aqaba on 6 July 1917. The revolt reached its climax when Faisal entered Damascus in October 1918, and established an Arab-led military administration in OETA East, later declared as the Arab Kingdom of Syria, both of which Transjordan was part of. During this period, the southernmost region of the country, including Ma'an and Aqaba, was also claimed by the neighbouring Kingdom of Hejaz.

In September 1922, the Council of the League of Nations recognized Transjordan as a state under the terms of the Transjordan memorandum.Transjordan remained a British mandate until 1946, but it had been granted a greater level of autonomy than the region west of the Jordan River. Multiple difficulties emerged upon the assumption of power in the region by the Hashemite leadership. In Transjordan, small local rebellions at Kura in 1921 and 1923 were suppressed by the Emir's forces with the help of the British. Wahhabis from Najd regained strength and repeatedly raided the southern parts of his territory in (1922–1924), seriously threatening the Emir's position.The Emir was unable to repel those raids without the aid of the local Bedouin tribes and the British, who maintained a military base with a small RAF detachment close to Amman.

The Treaty of London, signed by the British Government and the Emir of Transjordan on 22 March 1946, recognised the independence of Transjordan upon ratification by both countries' parliaments. On 25 May 1946, the day that the treaty was ratified by the Transjordan parliament, Transjordan was raised to the status of a kingdom under the name of the Hashemite Kingdom of Transjordan, with Abdullah as its first king.The name was shortened to the Hashemite Kingdom of Jordan on 26 April 1949. 25 May is now celebrated as the nation's Independence Day, a public holiday.  Jordan became a member of the United Nations on 14 December 1955.

Jordan is a unitary state under a constitutional monarchy. Jordan's constitution, adopted in 1952 and amended a number of times since, is the legal framework that governs the monarch, government, bicameral legislature and judiciary. The king retains wide executive and legislative powers from the government and parliament.The king exercises his powers through the government that he appoints for a four-year term, which is responsible before the parliament that is made up of two chambers: the Senate and the House of Representatives. The judiciary is independent according to the constitution.

The king is the head of state and commander-in-chief of the army. He can declare war and peace, ratify laws and treaties, convene and close legislative sessions, call and postpone elections, dismiss the government and dissolve the parliament. The appointed government can also be dismissed through a majority vote of no confidence by the elected House of Representatives. After a bill is proposed by the government, it must be approved by the House of Representatives then the Senate, and becomes law after being ratified by the king. A royal veto on legislation can be overridden by a two-thirds vote in a joint session of both houses. The parliament also has the right of interpellation. 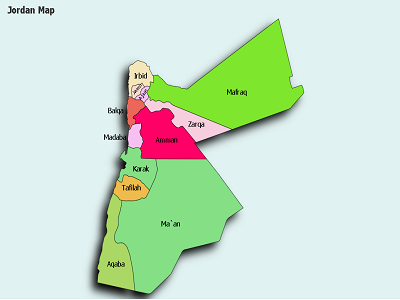 Built around the concept of pan-Arabism, the Hashemite Kingdom of Jordan is located in the heart of the Arab world. Since its establishment, it has become a model of moderation and an evolving democracy in the region.

Jordan is based on a modern, progressive Constitution and its governing system is a hereditary, parliamentary monarchy. Its people are like a family, where diverse components of different religions, languages and ethnicities have come together in a melting pot to become one Jordanian family, rendering the Kingdom unique in its unity, diversity and stability.

According to the Department of Statistics’ data from its 2015 census, Jordan’s population is around 9,531,712 people.

Jordan’s area is 89,213 square kilometres, and it shares borders with five states: the Kingdom of Saudi Arabia from the south, the Syrian Arab Republic from the north, the Republic of Iraq from the east and the occupied Palestinian territories from the west, in addition to the maritime border it shares with Egypt in the Gulf of Aqaba.

Jordan is located geographically between the 33° and 29°N latitude lines, and 39° and 34°E longitude lines, giving the country a moderate desert climate. Jordan’s land is arid and semi-arid, with a long summer, short winter and little rainfall.

The port of Aqaba is Jordan’s only sea access. It overlooks the Red Sea, with the Kingdom’s share of the coast being a 25-kilometre-long shore.

Jordan’s climate varies from Mediterranean in the west to desert in the east and south, but the land is generally arid. The proximity of the Mediterranean Sea is the major influence on climates, although continental air masses and elevation also modify it. Average monthly temperatures at Amman in the north range between 46 and 78 °F (8 and 26 °C), while at Al-ʿAqabah in the far south they range between 60 and 91 °F (16 and 33 °C). The prevailing winds throughout the country are westerly to southwesterly, but spells of hot, dry, dusty winds blowing from the southeast off the Arabian Peninsula frequently occur and bring the country its most uncomfortable weather. Known locally as the khamsin, these winds blow most often in the early and late summer and can last for several days at a time before terminating abruptly as the wind direction changes and much cooler air follows.

Precipitation occurs in the short, cool winters, decreasing from 16 inches (400 mm) annually in the northwest near the Jordan River to less than 4 inches (100 mm) in the south. In the uplands east of the Jordan River, the annual total is about 14 inches (355 mm). The valley itself has a yearly average of 8 inches (200 mm), and the desert regions receive one-fourth of that. Occasional snow and frost occur in the uplands but are rare in the rift valley. As the population increases, water shortages in the major towns are becoming one of Jordan’s crucial problems.

The overwhelming majority of the people are Arabs, principally Jordanians and Palestinians; there is also a significant minority of Bedouin, who were by far the largest indigenous group before the influx of Palestinians following the Arab-Israeli wars of 1948–49 and 1967. Jordanians of Bedouin heritage remain committed to the Hashemite regime, which has ruled the country since 1923, despite having become a minority there. Although the Palestinian population is often critical of the monarchy, Jordan is the only Arab country to grant wide-scale citizenship to Palestinian refugees. Other minorities include a sizeable number of Syrian refugees who fled to Jordan because of the Syrian Civil War, as well as a number of Iraqis who fled to Jordan as a result of the Persian Gulf War and Iraq War. There are also smaller Circassian (known locally as Cherkess or Jarkas) and Armenian communities. A small number of Turkmen (who speak either an ancient form of the Turkmen language or the Azeri language) also reside in Jordan.

The indigenous Arabs, whether Muslim or Christian, used to trace their ancestry from the northern Arabian Qaysī (Maʿddī, Nizārī, ʿAdnānī, or Ismāʿīlī) tribes or from the southern Arabian Yamanī (Banū Kalb or Qaḥṭānī) groups. Only a few tribes and towns have continued to observe this Qaysī-Yamanī division—a pre-Islamic split that was once an important, although broad, source of social identity as well as a point of social friction and conflict.

Nearly all the people speak Arabic, the country’s official language. There are various dialects spoken, with local inflections and accents, but these are mutually intelligible and similar to the type of Levantine Arabic spoken in parts of Palestine, Lebanon, and Syria. There is, as in all parts of the Arab world, a significant difference between the written language—known as Modern Standard Arabic—and the colloquial, spoken form. The former is similar to Classical Arabic and is taught in school. Most Circassians have adopted Arabic in daily life, though some continue to speak Adyghe (one of the Caucasian languages). Armenian is also spoken in pockets, but bilingualism or outright assimilation to the Arabic language is common among all minorities. 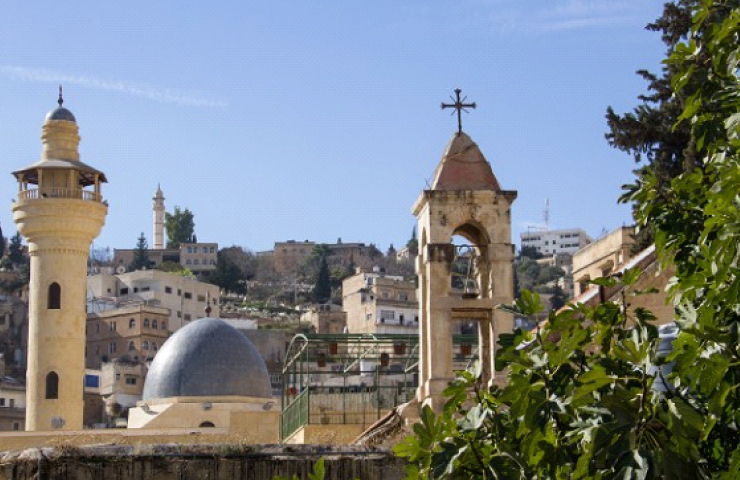 Virtually the entire population is Sunni Muslim; Christians constitute most of the rest, of whom two-thirds adhere to the Greek Orthodox church. Other Christian groups include the Greek Catholics, also called the Melchites, or Catholics of the Byzantine rite, who recognize the supremacy of the Roman pope; the Roman Catholic community, headed by a pope-appointed patriarch; and the small Syrian Orthodox Patriarchate of Antioch, or Syrian Jacobite Church, whose members use Syriac in their liturgy. Most non-Arab Christians are Armenians, and the majority belong to the Gregorian, or Armenian, Orthodox church, while the rest attend the Armenian Catholic Church. There are several Protestant denominations representing communities whose converts came almost entirely from other Christian sects.

The eastern Bedouin are principally camel breeders and herders, while the western Bedouin herd sheep and goats. There are some seminomads, in whom the modes of life of the desert and the cultivated zones merge. These people adopt a nomadic existence during part of the year but return to their lands and homes in time to practice agriculture. The two largest nomadic groups of Jordan are the Banū (Banī) Ṣakhr and Banū al-Ḥuwayṭāt. The grazing grounds of both are entirely within Jordan, as is the case with the smaller tribe of Sirḥān. There are numerous lesser groups, such as the Banū Ḥasan and Banū Khālid as well as the Hawazim, ʿAṭiyyah, and Sharafāt. These traditionally paid protection money to larger groups. The Ruwālah (Rwala) tribe, which is not indigenous, passes through Jordan in its yearly wandering from Syria to Saudi Arabia.