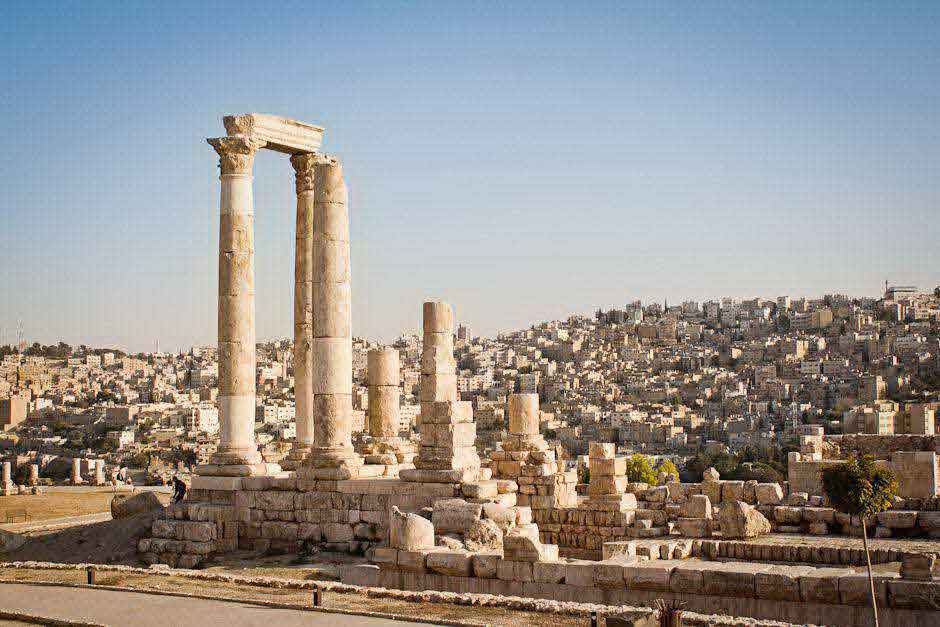 Amman was inhabited for more than 9,000 years according to the latest archaeological findings in and around the city. The city became the capital of the Ammonites and named as Ammon; used by  the Greeks and the Romans and was named Philadelphia, So Amman has a rich and deep history and tens of historical sites can be seen in and around the city.

The city Amman is built on seven hills, or jabals, each of which more or less defines a neighborhood.

The seven hills of Amman are an enchanting mixture of ancient and modern. Honking horns give way to the beautiful call to prayer which echoes from the stately minarets which grace the city.

Gleaming white houses, kebab stalls and cafés are interspersed with bustling markets—known in Arabic as souqs—and the remains of civilizations and ages long past. Sunset is perhaps the best time to enjoy Amman, as the white buildings of the city seem to glow in the fading warmth of the day. The greatest charm of Amman, however, is found in the hospitality of its residents. Visitors to Amman—and the rest of Jordan, for that matter—are continually surprised by the genuine warmth with which they are greeted. "Welcome in Jordan" is a phrase visitors will not soon forget.

Amman is built on seven hills, or jabals, each of which more or less defines a neighborhood. Most jabals once had a traffic circle, and although most of these have now been replaced by traffic lights, Amman’s geography is often described in reference to the eight circles which form the spine of the city. First Circle is located near downtown, and the series extends westward through Eighth Circle.

10:30 Visiting of Roman theater & the museum

Most of Amman’s noteworthy historical sites are clustered in the downtown area, which sits at the bottom of four of Amman’s seven hills, or jabals. The ancient Citadel, which towers above the city from atop Jabal al-Qala’a, is a good place to begin a tour of the city. The Citadel is the site of ancient Rabbath-Ammon, and excavations here have revealed numerous Roman, Byzantine and early Islamic remains. The most impressive building of the Citadel, known simply as al-Qasr ("the Palace"), dates back to the Islamic Umayyad period. Its exact function is unclear, but it includes a monumental gateway, an audience hall and four vaulted chambers. A colonnaded street also runs through the complex. To the north and northeast are the ruins of Umayyad palace grounds.

Close to al-Qasr lie the remains of a small Byzantine basilica. Corinthian columns mark the site of the church, which is thought to date from the sixth or seventh century CE. About 100 meters south of the church is what is thought to have been a temple of Hercules, today also known as the Great Temple of Amman. The temple was built in the reign of the emperor Marcus Aurelius (161-180 CE), and is currently under restoration. Also on Citadel Hill, just northwest of the Temple of Hercules, is the Jordan Archeological Museum. This small museum houses an excellent collection of antiquities ranging from prehistoric times to the 15th century. There is an exhibit of the Dead Sea Scrolls, a copy of the Mesha Stele (see Madaba section for explanation) and four rare Iron Age sarcophagi. Museum hours are 08:30-17:00 daily. On Fridays and official holidays the museum is open from 09:00-16:00.

Downhill from the Citadel and five minutes walk east from downtown, the Roman Theater is the most obvious and impressive relic of ancient Philadelphia. The theater, which was built during the reign of Antonius Pius (138-161 CE), is cut into the northern side of a hill that once served as a necropolis—or graveyard. It is very similar in design to the amphitheater at Jerash, and can accommodate 6000 spectators. The theater is still used periodically for sporting and cultural events.