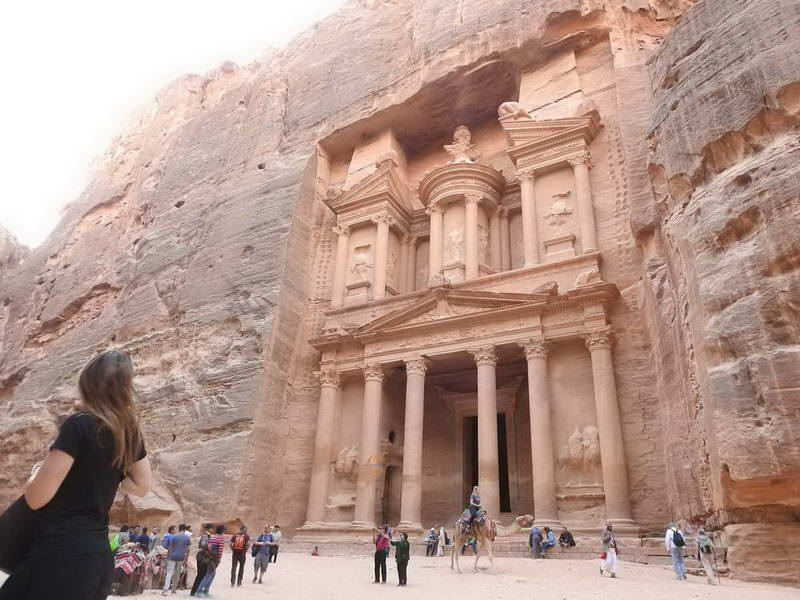 With the flexibility to explore on your own, you’ll enjoy the convenience of pre-booked transport from your hotel in Amman, and spend the night in the laid-back town of Wadi Musa. A full day to see Petra means you can walk to far-flung corners of the massive site, discovering the Treasury, Monastery, and the High Place of Sacrifice at your own pace before returning to Amman.

The city of Petra, capital of the Nabataean Arabs, is one of the most famous archaeological sites in the world, it is Located 240 km south of the capital Amman and 120 km north of the red sea town of Aqaba, Petra the world wonder is undoubtedly Jordan's most valuable treasure and greatest tourist attraction, and it is visited by tourists from all over the world.

You will be picked up from Amman at 8.00 am, driving towards Wadi Mousa (Petra) and stopping at different places on the way. Start from Dana Nature Reserve. You will then be taken to Shobak castle You will then visit the castle and continue toward Little Petra Petra. Spend overnight at Wadi Mousa city.

The next day you will be picked up from your hotel at 7.00 am (Site is open at 6 however) , and head out for a self- guided day in Petra. You will have 9 hours of exploring time inside Petra itself; many people choose to visit the treasury, monastery, the high area of Sacrifice and sites in between. You will be picked back up at 16.00 at your original departure point, and driven to your original hotel.

The city of Petra, capital of the Nabataean Arabs, is one of the most famous archeological sites in the world, it is Located 240 km south of the capital Amman and 120 km north of the red sea town of Aqaba, Petra the world wonder is undoubtedly Jordan's most valuable treasure and greatest tourist attraction, and it is visited by tourists from all over the world.

It is not known precisely when Petra was built, but the city began to prosper as the capital of the Nabataean Empire from the 1st century BC, which grew rich through trade in frankincense, myrrh, and spices.

Little Petra, also known as Siq al-Barid is an archaeological site located north of Petra and the town of Wadi Musa in the Ma’an Governorate of Jordan.Like Petra, it is a Nabataean site, with buildings carved into the walls of the sandstone canyons. As its name suggests, it is much smaller, consisting of three wider open areas connected by a 450-metre (1,480 ft) canyon. It is part of the Petra Archeological Park, though accessed separately, and included in Petra's inscription as a UNESCO world heritage site. It is often visited by tourists in conjunction with Petra itself, since it is free and usually less crowded.

Part of the great beacon chain of Crusader fortresses, Shobak Castle is by far the most lonely. Built in 1115 AD by Baldwin I, who later built Karak, it was originally known as Mont Realis (Montreal) and was the first outpost of the kingdom of Jerusalem in the Crusader district of Outrejordain.

Situated on an isolated knoll overlooking the trade routes that ran through the wadi below, Shobak is breathtaking.

The Dana Reserve is possibly the best known of Jordan's nature reserves. This showplace, set up in 1993, has become an exemplar of how to set up a sustainable, eco­friendly reserve. With its network of guided and unguided hiking trails, its campground, guesthouse and eco-Iodge with their staffs of residents, its dramatic wadis and mountains dropping about 1600 meters from the highest point, there are 320 square kilometers full of things to do and marvel at. Most surprising is not the Nabatean tomb, but the sea urchin fossils, now so far from the sea! Dana's unusual mushroom-shaped rock formations captivate the eye. Visitors will leave the reserve with an appreciation of the techtonic forces that shaped this region.