Wadi Al Karak is one of Jordan's natural wonders.From the southwestern outskirts of Karak, a journey begins in an ancient valley with an ancient civilization and scenic beauty. This is the valley that surrounds the outskirts of the city of Karak, or the fortified city, which stands on a prominent plateau adorned with a beautiful fortress, the Karak Castle.This valley is called Wadi Al Karak, where the beauty of the language remains, whether you read it from right to left or vice versa, as in Karak. Many springs stem from it, the most important of which is a spring of water called Ain Sarah.This heavy spring flows from heights of more than 900 metres, and pours into this beautiful valley.

The valley is characterised by the continuous flow of its water used to irrigate agricultural crops in the valley of the arm, through diversion ponds and dams, and spread along its course forest trees such as wild palms, tarfa and oleander, and various weeds that give the place a beautiful aesthetic character, not to mention the high-temperature mineral water pool that is used for treatment purposes. "Wadi'ah Valley is considered one of the important tourist valleys in Karak, where it is frequented by tourists, especially in the spring and summer to enjoy the beauty of nature, and to practise adventure tourism and medical tourism." 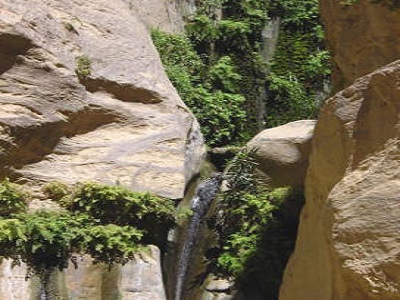 Where we spend a day doing various activities, including walking in a group of different terrain and slopes to high mountains, water courses, rocky peaks, wildflowers and mountains covered with trees. The total hiking distance will be 12 kilometres, and along the walk you will see many natural streams and waterfalls.

The Karak Valley region is one of the most important tourist and archaeological attractions in the Karak Governorate, and a caravan food basket throughout the year.

Nature has made the valley beautiful thanks to its greenery, and its splendour has been increased by the fresh spring of Ain Sarah flowing from the western slope of the city of Karak, where the water flowing around Roman columns testifies to golden periods that tell the seasons of the past.

The valley area derives its fame from the Ain Sarah spring, which was named after the lady Sarah, the wife of our master Ibrahim Al-Khalil, peace be upon him. Under the towering branches of willow trees, and to the sounds of falling waterfalls, the chirping of birds, and the moonlight hanging from the foot of the Karak Castle, the sun perched on the Misha hill of Al-Moabi, to make the visitor feel a pleasure unlike anything else.

Historian Wassef Jawhariyya, in his book (Ottoman Jerusalem in the Essential Notes), refers to Jamal Pasha’s interest in this spring, which he describes as one of the best springs in the East, and that he had ordered the transfer of its waters to him wherever he went during the First World War.He confirms that German doctors advised Commander Jamal Pasha to use the water of this torrent. The water was transported in special containers known as (magnets) carried on animals and sent to the place where he was present throughout the war.

Centenarians in the area mentioned that the Ain Sara spring used to attract the people of Karak to wash the wool and prepare it for the young men who were about to marry, and the girls were frequented by groups when one of them got married, as there is a flat rock next to the spring called the “bride’s seat” covered by willow branches they claim is the rock that was the bride you sit on it.