Amman Citadel stands on one of the hills of the seven hills known as Jabel al Qala. Amman Citadel is the site from where the sightseeing in Amman should be started. It is an important part of the Amman tour. Amman, the capital city of Jordan, has been the seat of various civilizations. And it is the home to the earliest development areas of the Middle Bronze Age, the Iron Age, the Hellenistic Age, the late Roman Age and the Arabian Islamic Age.

The Citadel stands beside the Jordan Archaeological Museum and a cluster of several other structures can also be seen in Amman Citadel. Amman Citadel also offers a spectacular view of the entire city . It is a place bearing both military importance and religious value.

The L-shaped citadel hill, inhabited at least since the Early Bronze Age, was fortified at various times thereafter, including massive walls of the Middle Bronze Age. These have recently been excavated on the south-east side of the hill. There are only scant architectural remains from these early times -most of what we see today is from the Roman, Byzantine or Umayyad periods, whose monuments overlie what was there before. 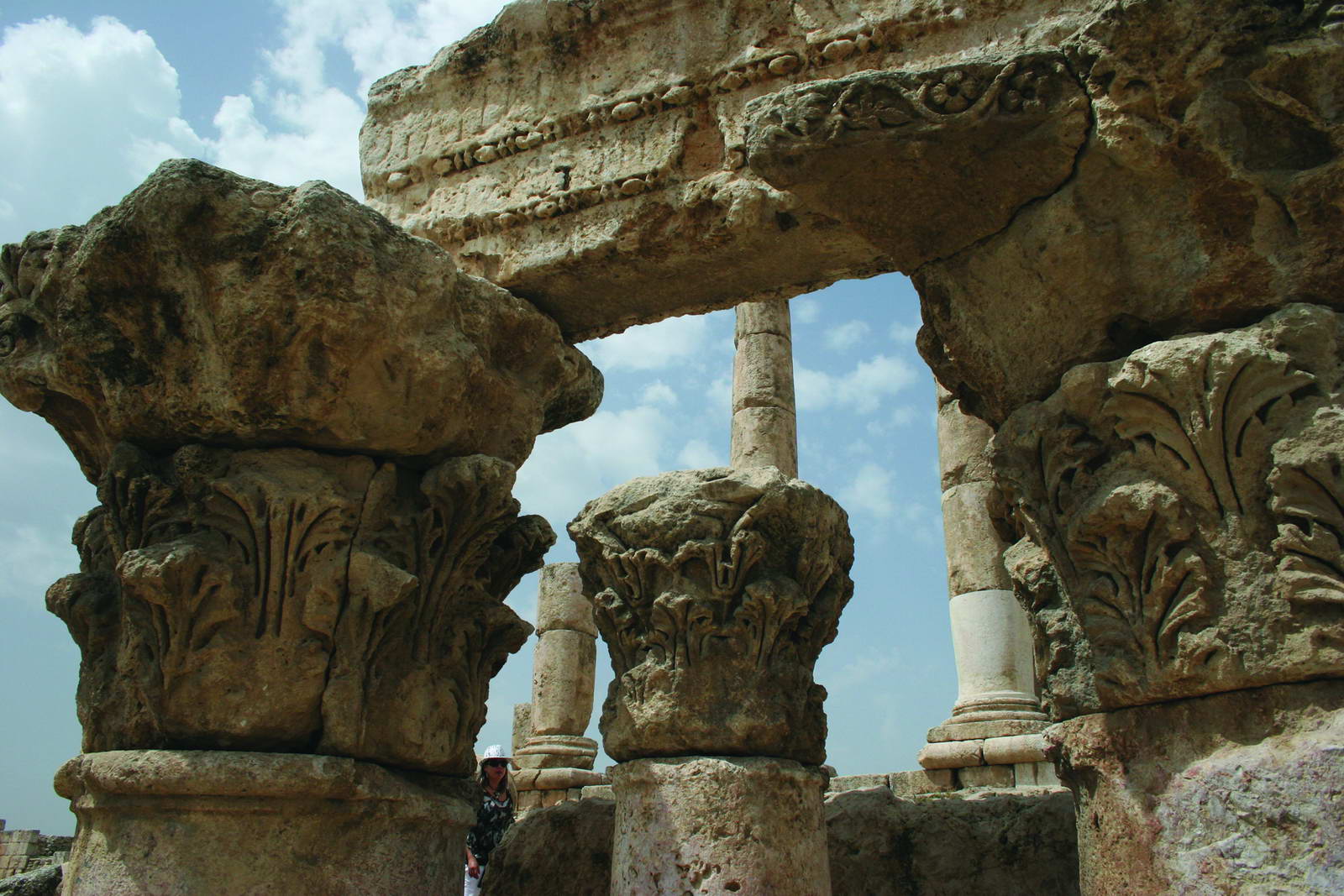 The most significant Roman structure, the temple of Hercules, was built, according to an inscription, when Geminius Marcianus was governor of the Province of Arabia (AD 162-166), and was dedicated to the co-emperors Marcus Aurelius and Lucius Verus. It was not the first sanctuary on this site - remains have been found of an Iron Age shrine, probably dedicated to the Ammonite god Milcom; and the great exposed rock at the heart of the temple of Hercules is thought to have been part of an even earlier sanctuary.

Stones and columns from the temple were reused in the 5th/6th-century church that lies north-east of it, built to serve the spiritual needs of the small Christian community that remained on the citadel as part of a residential and industrial complex.

In the Umayyad period Roman building material was again re-used to create a palace and administrative offices in what may have been a second Roman temple precinct. It was the headquarters of the provincial governor, appointed by the Umayyad Caliphs in Damascus. Still standing to its full height (though recently restored with a wooden dome), is the monumental entrance hall, a grand waiting room for those wishing to see the governor. Between this and the only modern building on the citadel (the Archaeological Museum) lie the remains of the Umayyad mosque, while to the west of the hall is the large circular cistern which supplied the palace with water.

These structures represent the key elements of a complete Islamic City; its structural units comprise a mosque, souk, hammam and palace (which contained a reception room and a throne room) in addition to several residential units, which can be seen at this site.

The palace was built on the remains of the temenos of a Roman temple, while the rest of the Medina, or city, covered a vast part of this hill. This part of the city was reserved for the governor and his family, entourage, employees and guards.  Civilians resided in the lower part of the city, which is today known as downtown Amman.

In 749 AD a strong earthquake destroyed many of these buildings. Around a year later, the Abbasides overthrew Umayyad rule and renovated and re-divided the residential units into smaller rooms using walls that were cruder than the previous ones.

North of the mosque lies an open courtyard or ‘rahbah’. The rahbah is flanked on the east and west by 11 small rooms or shops, which make up the souk. Three paths led from the rahbah to connect with gates in the fortification walls surrounding the citadel.

Citadel Hill has been a focus for human settlement since the Paleolithic Age, more than 18,000 years ago. Unfortunately, when the Romans moved in to occupy the area, they cleared away whatever they found, including the remains of the Ammonite city of Rabbath Ammon, and chucked it over the side of the hill: Bronze Age, Iron Age and Hellenistic pottery shards have been found mixed up with Roman remains on the slopes below. Of the remains surviving today, the most impressive by far is a huge Umayyad palace complex on the upper terrace of the Citadel, dating from the first half of the eighth century. On the middle terrace below and to the south lies the Roman Temple of Hercules, its massive columns dramatically silhouetted against the sky. East of the temple, Roman fortifications protect the grassy lower terrace, which has no visible antiquities.

The easiest way to reach the summit is by taxi; the ascent on foot (20min from Downtown) is extremely steep. About 150m along Shabsough Street as you head east, and just past the second turning on the left, a side-street has a wide flight of steps leading left up the hillside. Turn right at the top, and head up any way you can from here: there are crumbling steps most of the way, often leading through private backyards, though note you’ll still have to circle around to enter the site at the ticket office. If you’re driving, head east out of Downtown towards Zarqa, come off, pass under the highway, rejoin it heading west, then exit right. At the traffic lights bear left steeply up the hill, along King Ali bin Al Hussein Street. Near the top a hairpin left turn brings you to the car park. 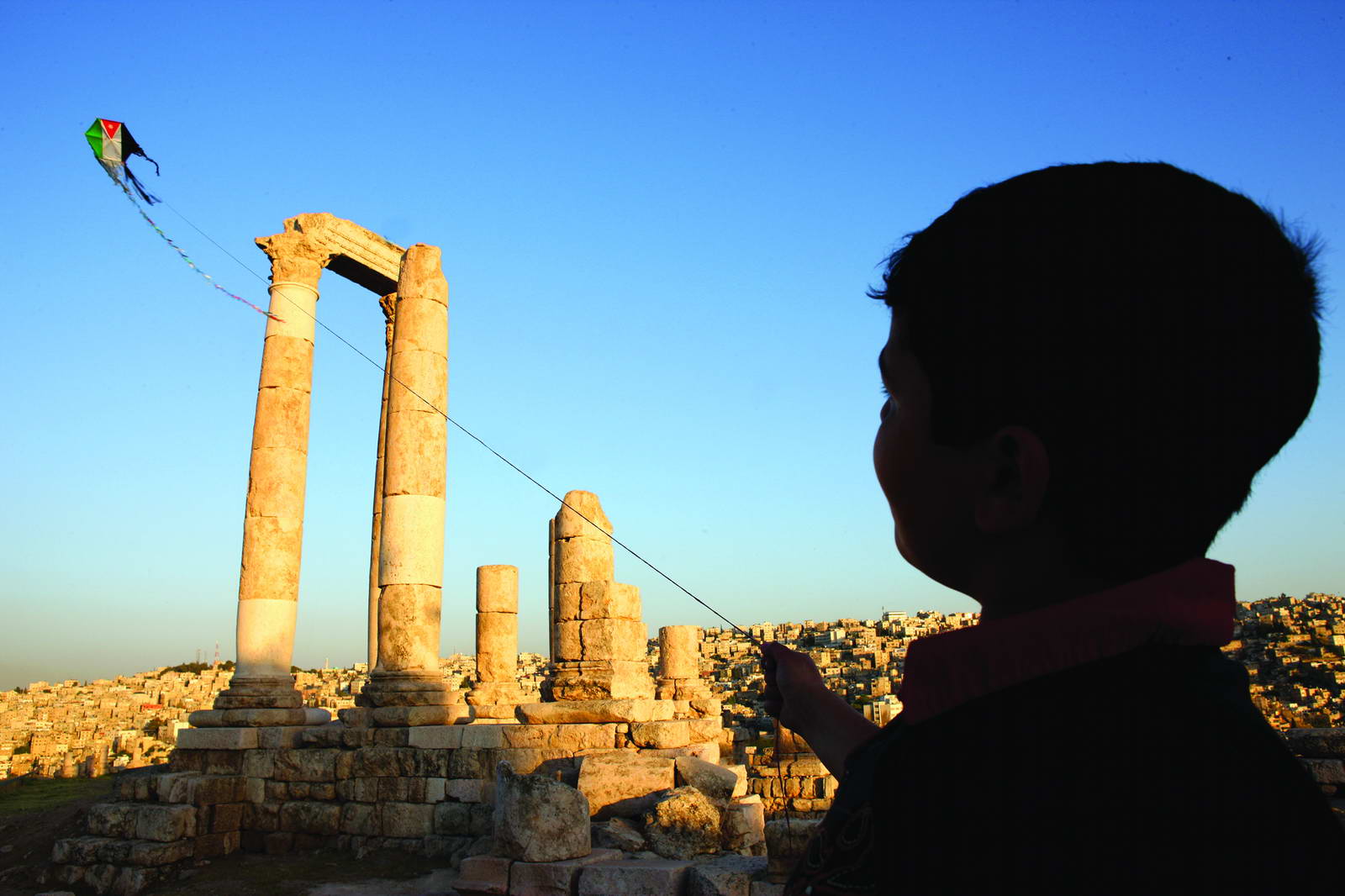 What you can see in Citadel Amman:

The great temple of Hercules (Herakles) was built between 162-166 AD. Larger than any temple in Rome itself, the massive structure faces east and is seen here from the front (northeast corner.) The temple portico is framed by six 33-foot tall columns. The absence of columns on the rest of the structure has convinced the excavator that the temple was actually left unfinished. A model of the temple is displayed at ACOR, the American Center for Oriental Research in Amman.

This great temple was dedicated to a supreme Roman deity. The temple has been attributed to the popular hero-god Hercules due to the discovery of gigantic arms of a marble statue near the temple area. Hercules was the son of Zeus and a mortal woman (Alcemene) and was known for his supernatural physical strength. Also, Hercules is depicted on Roman coins minted in the city, which was called Philadelphia at the time.

The temple stands within an immense temenos (sacred precinct) that is surrounded by porticos. It was positioned on a large purpose –built stone podium and was meant to be seen from the lower city. It is thought that it was built on top of an earlier temple associated with Ammonite god Milkom.

According to an inscription that was at the top of its façade, the temple of Hercules was built when Geminius Marcianos was governor of Provincia Arabia (161-166 AD) in dedication to the co-emperors of Rome, Marcus Aurelius and lucius Verus. A second Roman temple was constructed in the north of the Citadel site at the highest point of the acropolis. It was built before the mid 2nd century AD, however its materials were later integrated into the structure of the Umayyad Complex in 730 AD.

The temple, described on the previous page, is viewed here from the rear (northwest corner). The temple itself is 31m long by 26m wide; its outer temenos (sacred precinct) measures 122x72 meters.

The Byzantine basilica was constructed in the 5th-6th centuries AD. Its nave is flanked by two rows of columns. The photo looks eastwards from the entrance down the length of the nave, towards the partially reconstructed semicircular wall of the apse.

This view looking north shows the domed entrance (vestibule) to the Umayyad governor's palace (8th century) in the background. The dome is a modern reconstruction that gives the building an odd, Pac-Man-like appearance. The entrance to the vestibule is the large semicircular archway below the dome. In the foreground are the remains of the palace mosque, whose column bases surround an open courtyard. A short section of the mosque's wall has been re-erected here.

This large cistern, located to the right of the vestibule, was the primary water supply to the governor's palace. At 5m deep and 16m in diameter, it would have held just over 1,000 cubic meters, or approximately 250,000 gallons, of water. The cistern was fed by rainwater through an inlet channel, and could be entered for maintenance by the stairs shown in the photo. A column, whose stump is standing at the bottom of the cistern, measured the water level.

Dome of the Vestibule

The interior of the dome of the Umayyad vestibule is shown here. This is a modern recreation; the original dome's interior would have been painted and plastered, giving a much different appearance. 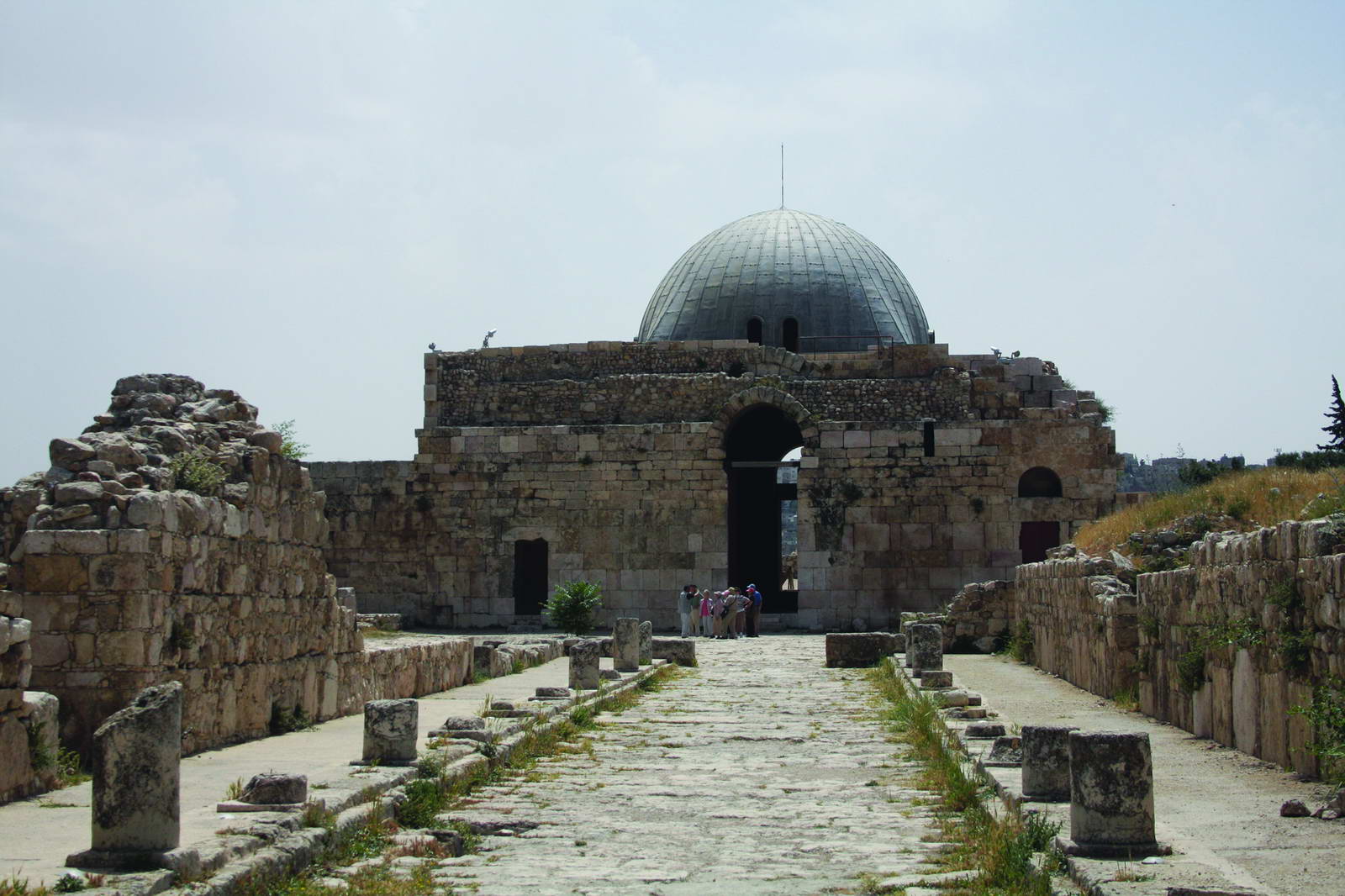 This early Bronze Age cave tomb dates to the 23rd century BC. Tombs like this exist in different places in Amman, and they often have multiple burials inside. This cave houses a series of rock-cut tombs, and if you step in through the opening you will see the limestone cavities. These were modified for communal burial in the Middle Bronze Age 4000 years ago.

It was common for such features and structures to be reused for different purposes in different periods of history or by different civilizations. This tomb was cleared and reused during the Umayyad period by stonecutters who were preparing the building stones for the massive building program at the Citadel.

Amman Citadel visit is covered in the following Tours