Islam arose as a religious and socio-political force in Arabia in the 7th century CE (610 CE onwards). The Islamic Prophet Muhammad (l. 570-632 CE), despite facing resistance and persecution, amassed a huge following and started building an empire. The tenets of this empire were to be humanitarian and its military might uncontestable. After he died in 632 CE, his friend Abu Bakr (l. 573-634 CE) laid the foundation of the Rashidun Caliphate (632-661 CE), which continued the imperial expansion. Though a feeble force at first, the Islamic Empire soon became the most important influencer in the Middle East and the Mediterranean. Within a few decades, the empire expanded from the city of Medina in Hejaz to engulf all of Arabia, Iraq, Syria, Levant, Iran, Egypt, parts of North Africa, and several islands in the Mediterranean. Internal conflict during the First Fitna (656-661 CE), or the first Islamic civil war, stagnated the empire's borders temporarily but the conquests were resumed afterward by the Umayyad Dynasty (661-750 CE). 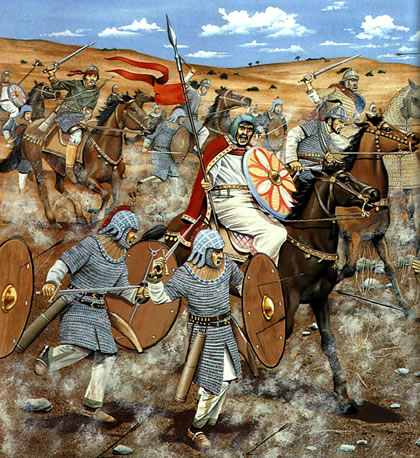 Dawn of the Caliphate & Ridda Wars

At the morrow of Prophet Muhammad's death, the Islamic Empire slid to the brink of disintegration, as many advocated pre-Islamic home-rule system. This threat, however, was averted when Abu Bakr (r. 632-634 CE) proclaimed himself the Caliph of the Prophet and the first supreme ruler of the Islamic realm. Back in the days of the Prophet, the Byzantine governor of Syria had murdered a Muslim envoy in cold blood, prompting the Prophet to send an expeditionary force to avenge this injustice and dishonor, however, the force was defeated with severe losses at the Battle of Mu'tah (629 CE). Caliph Abu Bakr's first action was to dispatch another force to avenge the defeat at Mu'tah, as had been planned by the Prophet.

As this force left, the Arabian Peninsula broke into an open rebellion. The Caliph cleverly exploited his foes' disunity and subjugated their forces within a year in what was later termed as the Ridda Wars (632-633 CE). Khalid ibn al-Walid (d. 642 CE), a prominent Muslim strategist, played a pivotal role in this fight by crushing the strongest opposition force under an imposter (false prophet) named Musaylimah in December, 632 CE, at the Battle of al-Yamama. After the defeat at al-Yamama, the rebels could no longer pose a threat equal to what they had in the beginning, and by March 633 CE, order was restored. Abu Bakr had saved his Prophet's empire and religion; for this, he was hailed as a hero and his authority became unquestionable.

Abu Bakr now sought to expand his realm beyond the Arabian Peninsula. The Muslim Empire bordered two superpowers: the Byzantine Empire (330-1453 CE) and Sassanian Empire (224-651 CE) to the north-west and north-east respectively. These two colossal powers often clashed violently in prolonged wars, had exhausted their resources, and severely repressed Arabian tribes living in the Middle East in the course of pursuing ultimate power. For Abu Bakr, this was an opportune moment, although he may not have known that.

Abu Bakr sent four divisions under Shurahbil ibn Hasana (l. 583-639 CE), Yazid ibn Abi Sufyan (d. 640 CE), Amr ibn al-As (l. c. 573-664 CE), and Abu Ubaidah (l. 583-639 CE) to raid Syria and the Levant. These corps were instructed not to face the Byzantine army in the open or to attack any major cities and castles. Initially successful, these corps soon faced the threat of a major Byzantine force mustered by the ailing Byzantine emperor Heraclius (r. 610-641 CE) and led by his brother Theodore. Not wishing to leave anything to fate alone, Abu Bakr ordered Khalid to advance to Syria.

Khalid hand picked his best men and moved through the trackless desert, using camels as water reservoirs, and appeared on the fringes of Syria. There he united the four divisions and defeated the Byzantine army at the Battle of Ajnadayn (634 CE). When Umar ascended to the office, he dismissed Khalid from his post and placed Abu Ubaidah in charge, probably seeking to assert more control over the campaign.

The Rashidun forces continued to advance northwards in the Levant and Syria. They took Damascus in 634 CE, either through an assault or treason, defeated the Palestinian imperial division in the Battle of Fahl (Pella; 635 CE). Emesa (Homs) became the next target and fell in 636 CE, bringing the Muslims dangerously close to Aleppo and Antioch – where the emperor was residing himself. Angered at Theodore's early defeat, Heraclius dismissed him and sent another huge army under Vahan of Armenia (d. 636 CE) to face the Rashidun troops.

Khalid, who was not officially in command, was given charge owing to his skill in warfare. The notorious general retreated southwards beyond the Yarmouk river and confronted the imperial army there. The Battle of Yarmouk (August 636 CE) raged on for six days, with the Muslim forces on the back foot initially, but on the climactic dawn of 20 August 636 CE, Khalid ordered an advance and enveloped his foes with his cavalry. The imperial troops routed in panic and faced severe casualties; their field commander probably died in the battle. After this victory, the Muslims swept over Syria, Jordan, and Palestine. Since the Byzantines had given up on the region thereafter, victorious troops were sent to the Iraqi front to reinforce the campaign there.

Jerusalem was besieged shortly in 637 CE and then capitulated after receiving guarantees of safety personally from Caliph Umar. The holy city thus entered Muslim control bloodlessly and the Jewish population that had been banished by the Romans, five centuries prior, was allowed to return. Umar also dismissed Khalid from his post officially; this was either because of personal reasons or because of controversies around the general.

Before his dismissal, Khalid had led expeditions into Anatolia and Armenia in 638 CE; he died in 642 CE and was buried in Emesa. Abu Ubaidah, who had been placed as the governor of Syria, died in 639 CE in the wake of the plague that devastated the region. In his stead, Muawiya (l. 602-680 CE), the son of Abu Sufyan, a prominent pre-Islamic Meccan aristocrat from the Umayya clan who had later converted, was sent as a replacement. Muawiya effectively took hold of the region and solidified Muslim control over it, and later on, during the reign of Uthman, his cousin and the third caliph (r. 644-656 CE), he conquered all of Armenia (653-655 CE).

One of the oldest mosques in Amman, rebuilt by King Abdullah I in 1932 on the site of the one built by the second Caliph, Omar Bin Al-Khattab around 640 AD. Tourists may be able to enter if dressed appropriately.

Close to this mosque are two famous souqs: Souq Bukharia (good for getting souvenirs) and Souq Al-Sukar (fruit, vegetables, nuts and spices.)

The first Islamic city outside the Arabia, was established by the Khalipha Uthman Ibn Affan in 650 Ad, at the beach of Aqaba because of its strategic location at the junction of trading routes between Asia, Africa, and Europe, and was an important port for Palestine and Hijaz during the Islamic conquests, also was an important resting place for pilgrims on their way to Mecca.