The Assyrian Empire, and its continuation the Neo-Assyrian Empire, both employed iron weapons in conquest and became the greatest and most extensive political power in the world up to that time. Under the Assyrian king Tiglath Pileser I (1115-1076 BCE) the region of the Levant was firmly taken under Assyrian control and would remain part of the empire until its fall in 612 BCE.

In 539 B.C., the Persians conquered the Babylonians and took over the territories that were under their control. The archaeological evidence from this period is still poor, however, Jordan was most probably part of the Persian Abr Nahrain province that also included parts of Palestine. Persian provinces enjoyed a self administration status and were usually ruled by local dynasties.

It is well Known and documented in history that Persian used to Destroy cities and burn out books and libraries ! Their goal was to destroy any civilization that might become a threat to their existence - they have never built anything on the areas that they conquer or occupied - Saying this : you won’t find any ruins, culture or history in all regions they have reached - except what is mentioned in the history books. 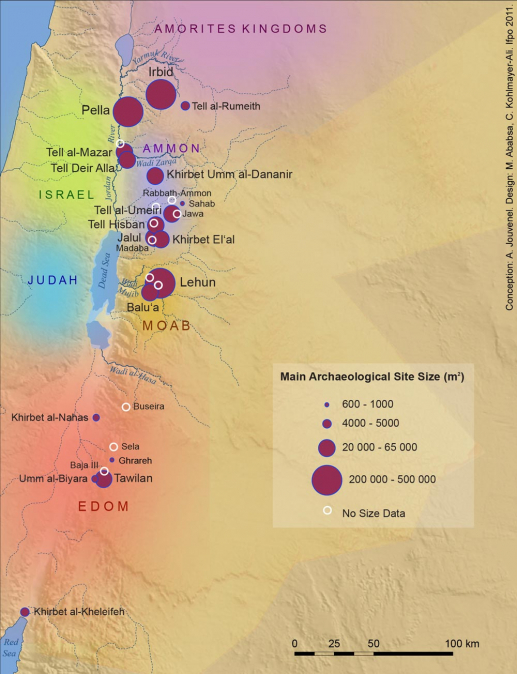 The Babylonian Empire then took possession of the land until it was taken by Cyrus the Great, founder of the Achaemenid Empire (549-330 BCE), also known as the Persian Empire, which then fell to Alexander the Great in 331 BCE and became part of his emerging empire. Prior to Alexander's invasion, a unique culture grew up in Jordan whose capital city has become one of the most recognizable images from the ancient world and a popular tourist attraction in the present day: the Nabateans and their city of Petra.

The Nabateans were nomads from the Negev Desert who arrived in the region of modern-day Jordan and established themselves sometime prior to the 4th century BCE. Their city of Petra, carved from sandstone cliffs, may have been created at this time but possibly earlier. The Nabateans initially gained their wealth through trade on the Incense Routes traveling between the Kingdom of Saba in southern Arabia and the port of Gaza on the Mediterranean Sea. By the time they had established Petra, they were also in control of other cities along the Incense Routes and were able to tax caravans, provide protection, and control the lucrative spice trade.

The famous facade of Petra, known today as The Treasury, was almost certainly originally a tomb or mausoleum and, contrary to popular imagination, does not lead into any intricate maze of hallways but only a fairly short and narrow room. The more spacious dwellings which make up the rest of the cliff city attest to the Nabateans' wealth as traders who had enough disposable income and manpower to be able to afford such an intricate and timely construction.

The name 'Petra' means 'rock' in Greek; the city was originally called Raqmu (possibly after an early Nabatean king) and is mentioned in the Bible and in the works of writers such as Flavius Josephus (37-100 CE) and Diodorus Siculus (1st century BCE). At the height of the Nabatean Kingdom, the Jordan region enjoyed great prosperity and not only in and around the city of Petra. The Nabateans were certainly the wealthiest but people of other nationalities shared in their good fortune as well.

In c. 200 BCE the governor of Ammon, Hyrcanus, had his elaborate fortress-palace Qasr Al-Abd ("Castle of the Servant") built which would have required a huge amount of disposable income. Flavius Josephus describes the palace (which he understood as a fortress) in glowing terms as “built entirely of white stone” on a grand scale, including a large reflecting pool, and how its walls were carved with "animals of a prodigious magnitude" as well as banquet halls and living quarters supplied with running water (Merrill, 109). Ruins of this structure survive today near Araq al-Amir, although in a greatly diminished state from Josephus' time, but still attesting to the wealth and vision of the man who commissioned it.

The first historically attested king of the Nabateans was Aretas I (c. 168 BCE) and so, although the Nabateans had established themselves in the region centuries before, the Kingdom of Nabatea is dated from 168 BCE to 106 CE when it was annexed by Rome. The Nabateans had a highly developed culture in which art, architecture, religious sensibilities, and trade all flourished. Women had almost equal rights, could serve as clergy, and even reign as autonomous monarchs. The most important deities of the Nabatean pantheon were female and women most likely would have served as their high priestesses.

To solve the problem of a reliable water supply in the arid region, the Nabateans engineered a series of wells, aqueducts, and dams whose efficiency was unrivaled in their day. With access to water, and established in some of the most inaccessible areas of the region, the Nabateans were able to fend off aggressors attracted by their wealth. They could not hold out long against the superior might of Rome, however, which steadily took their territories and absorbed their trade routes until finally taking the entire kingdom and renaming the region Arabia Petrea in 106 CE under the emperor Trajan (98-117 CE).