The Iron Age saw the development and consolidation of three new kingdoms in Jordan: Edom in the south of Jordan, Moab in central Jordan, and Ammon in the northern mountain areas of Jordan (This is where Amman-The capital of Jordan name was derived) . To the north in Syria, the Aramaeans made their capital in Damascus. This period saw a shift in the level of power from individual “city-states” to larger kingdoms. One possible reason for the growth of these local kingdoms was the growing importance of the trade route from Arabian Peninsula, which carried gold, spices and precious metals through Amman and Damascus up to northern Syria.

Major political changes in Jordan took place in the Levant around 1200 BC.The most significant was the collapse of the three major empires that had controlled the region: the Egyptian, Hittite and the Cassite.This resulted in the emergence of new political forces, and the immigration of new ethnic groups into the region.

The previous political system, the 'City-States,' came to an end to be replaced by a political-ethnic system, and the establishment of tribal kingdoms.

Iron Ages refers to the period when iron was first mined, smelted and used. This era is also distinguished by the variety of written sources that provide information about Jordan. A number of sources are from Egypt and Mesopotamia, others are the Biblical narratives, but the most important are the earliest known local sources including the Mesha stele.

There is evidence of conflicts between these kingdoms in Jordan during the Iron Age II, especially with their neighbours, the Jewish. The stele of Mesha is an exceptional testimony of this . At that time, traces of a State with an administrative centre in Buseira appeared in the south. The towns of Tawilan and Umm al-Biyara developed in the eighth to seventh century BC in Jordan, when the Jordanian kingdoms were under Assyrian supervision and were dependent on it. No trading posts or Assyrian administrative centres have been discovered in Jordan, indicating a lack of direct control. The kingdoms benefited from increased trade between the Arabian Peninsula  and Syria during the Pax Assyriaca (700-652 BC), including the incense trade. At that time, southern Jordan was part of an economic and cultural sphere relay network to Arabia. The exact trade routes are difficult to make out but it is possible to distinguish a north-south route, better known as the “kings’ highway '' as mentioned in the Bible. According to archaeological material, particularly ceramics, trade also flourished with Palestine  and Judah.

It is very important to mention that at all times during the history till the end of The Ottoman empire and before 1948, all human inhibitions, groups  and Kingdoms used to be scattered from east to west (West Jordan and East Jordan - Palestine) and used to unify one entity. ie . The distance between Amman and Jerusalem is less than 80 Km which used to be crossed in a day or two, and during the Nabateans period they used to have a harbor at the Mediterranean sea which indicates that all southern parts of Palestine used to be a part of their territory.

The nation of Ammon or the Ammonites were a people living in the mide-north areas  of Jordan and Palestine whose origin in the Old Testament traces to Lot, the nephew of the patriarch Abraham. Because of their kinship with Abraham, the Ammonites were not listed among the peoples whom the Israelites were supposed to drive out of Canaan. The Bible stipulates that they were given their land by God, who helped them defeat its giant-like earlier inhabitants. However, disputes over territory led to frequent warfare between the Ammonites and Jews (and between Moab and Jews as written in Mesha Stele)

In the time of the judges, the Ammonites and Jews engaged in various battles, and the Ammonites were characterized by the biblical writers as one of God's instruments to punish the Jews for their sins.

The Ammonites occasionally rebelled against their Hebrew overlords, usually to their detriment. They later helped the Babylonians defeat Judah and were subsequently rejected by the Jews and forbidden to intermarry with them, although this may not have been strictly enforced. Although they left few historical records, the Ammonites survived well into the second century C.E.. Their capital city of Rabbah was located close to todays' Amman, Jordan. Though rarely mentioned in Christian tradition, Jesus' lineage was partly Ammonite.

The kingdom of Ammon was located in northwestern Arabia east of Gilead in what is today called Jordan and Syria, However, the Ammonites also claimed territories east of Jordan that were occupied by the Jews. The borders of the Ammonite territory are not uniformly defined in the Old Testament and no doubt fluctuated as the results of warfare over the centuries.

The western border of Ammon was often a matter of dispute between Ammon and Palestine . In Judges 11:13, the king of Ammon demanded the restoration of the land "from Arnon even unto Jabbok and unto Jordan." This claim was rejected by Jews on the grounds that Jews had taken the land not from Ammon but from the Amorites. The other limits of Ammonite territory are even less clear. On the south, it adjoined the land of Moab. In the north, it may have met that of the king of Geshur (Joshua 12:5) and later Damascus, while in the east it apparently merged into the desert populated by Aramean nomadic tribes. 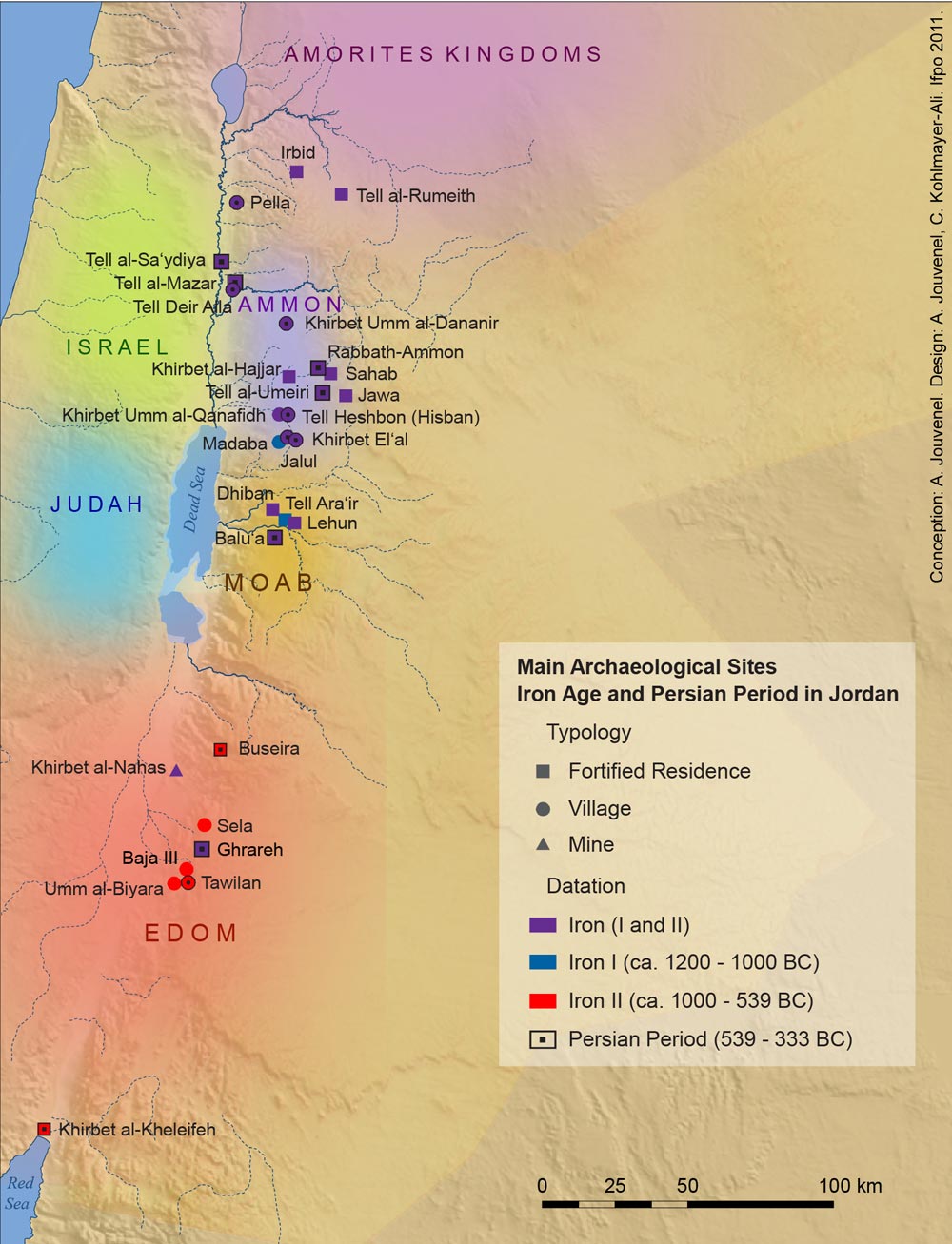 Moab is the name of an ancient Levantine kingdom whose territory is today located in the modern state of Jordan. The land is mountainous and lies alongside much of the eastern shore of the Dead Sea. The existence of the Kingdom of Moab is attested to by numerous archaeological findings, most notably the Mesha Stele, which describes the Moabite victory over an unnamed son of King Omri, an episode also noted in 2 Kings 3. The Moabite capital was Dibon. According to the Hebrew Bible, Moab was often in conflict with its Jews neighbours to the west.

In the Nimrud clay inscription of Tiglath-pileser III (r. 745–727 BCE), the Moabite king Salmanu is mentioned as tributary to Assyria. Sargon II mentions on a clay prism a revolt against him by Moab together with Philistia, Judah, and Edom; but on the Taylor prism, which recounts the expedition against Hezekiah, Kammusu-Nadbi (Chemosh-nadab), King of Moab, brings tribute to Sargon as his suzerain.[citation needed] Another Moabite king, Mutzuri ("the Egyptian"?), is mentioned as one of the subject princes at the courts of Esarhaddon and Assurbanipal, while Kaasḥalta, possibly his successor, is named on cylinder B of Assurbanipal.[citation needed]

Sometime during the Persian period Moab disappears from the extant historical record. Its territory was subsequently overrun by waves of tribes from northern Arabia, including the Kedarites and (later) the Nabataeans.[citation needed]

In Nehemiah 4:1 the Arabs are mentioned instead of the Moabites as the allies of the Ammonites. 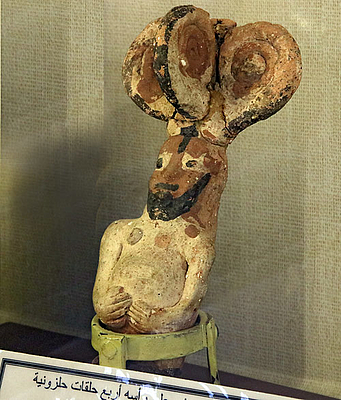 Edom was an ancient kingdom in Transjordan located between Moab to the northeast, Wadi Arabah to the west, and the Arabian Desert to the south and east. Most of its former territory is now divided between present-day southern Palestine and Jordan. Edom appears in written sources relating to the late Bronze Age and to the Iron Age in the Levant.

Edomites are related in several ancient sources including the Tanakh, a list of the Egyptian pharaoh Seti I from c. 1215 BC as well as in the chronicle of a campaign by Ramesses III (r. 1186–1155 BC). Archaeological investigation has shown that the nation flourished between the 13th and the 8th century BC and was destroyed after a period of decline in the 6th century BC by the Babylonians. After the fall of the kingdom of Edom, the Edomites were pushed westward towards southern Judah by nomadic tribes coming from the east; among them were the Nabataeans, who first appeared in the historical annals of the 4th century BC and had already established their own kingdom in what used to be Edom by the first half of the 2nd century BC. More recent excavations show that the process of Edomite settlement in the southern parts of the Kingdom of Judah and parts of the Negev down to Timna had started already before the destruction of the kingdom by Nebuchadnezzar II in 587/86 BC, both by peaceful penetration and by military means and taking advantage of the already-weakened state of Judah.

Once pushed out of their territory, the Edomites settled during the Persian period in an area comprising the southern hills of Judea down to the area north of Be'er Sheva. The people appear under a Greek form of their old name, as Idumeans or Idumaeans, and their new territory was called Idumea or Idumaea, a term that was used in the Hellenistic and Roman periods, also mentioned in the New Testament. During the 2nd century BC, the Edomites were forcibly converted to Judaism by the Hasmoneans, and were incorporated into the Jewish nation.

Edom and Idumea are two related but distinct terms; they relate to a historically-contiguous population but to two separate, if adjacent, territories which the Edomites/Idumeans occupied in different periods of their history. The Edomites first established a kingdom ("Edom") in the southern area of modern-day Jordan and later migrated into the southern parts of the Kingdom of Judah ("Idumea", or modern-day southern Israel/Negev) when Judah was first weakened and then destroyed by the Babylonians in the 6th century BC

The Iron Age lasted between 1200 and 600 BC, in that time, Petra area was occupied by the Edomites. This came when the Edomites rebelled after the death of King Solomon in 928 B.C. when Palestine split into two kingdoms to be in the North and Judah in the south. The Edomites were known as descendents of Esau and this was referenced in the Old Testament of the bible.The configuration of mountains in Petra allowed for a reservoir of water for the Edomites. This made Petra a stopping ground for Merchants, making it an outstanding area for trade. Things that were traded here included wines, olive oil and wood.

Initially, the Edomites were accompanied by Nomads who eventually left, but the Edomites stayed and made their mark on Petra before the emergence of the Nabataens. They were then engaged in battle with King Amaziah of Judah and chased back into their own lands. It is said that 10,000 men were thrown off of the mountain Umm el-Biyara. This story has been debated by scholars, as it is in so-called biblical times.

The Edomite site excavated at the top of the Umm el-Biyara mountain at Petra was established no earlier than the seventh century BCE (Iron II).