The organisation of Ayyubid and Mamluk governance in the territory that became modern Jordan grew out of the administrative and defensive structures developed under Frankish rule. Two of the Crusader castles of Outre-Jourdain (in today’s Kerak and Shawbak) continued to function as important military bases and administrative centres. 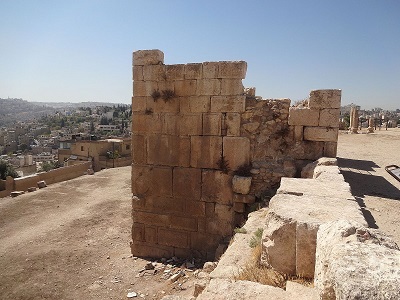 Much of the economic and administrative restructuring of the region under Salah al-Din’s descendants, upon the return of Kerak to Muslim hands in 584/1188, centred on security, specifically defined in terms of safe transportation for pilgrims and merchants. The task of administration was initially shared by Cairo and Damascus, with a border between their spheres located around the Wadi al-Zarqa’. The Ayyubids of Kerak eased caravan travel by digging wells and cisterns. Seasonal markets serving the needs of pilgrims then emerged in Jordanian towns and villages located on the pilgrimage route (the old King’s Highway), providing food, water, housing, fodder, animal transport, and supplies of various kinds. Zarqa, Ziziya, Lejjun, and Aqabat-Aila were important stops for pilgrims in the late twelfth and thirteenth centuries. Ajlun (fortified between 1188 and 1192), Azraq (in 1236-7), Salt (in 1220), Zarqa, Shawbak and Kerak (the latter two renovated by the Ayyubids) were defensive posts .

The Ayyubid watchtower is a stone tower dating back to the Ayyubid period (c. 1170-1250), more specifically in the year 1220, on the southern wall of the Amman Citadel in the centre of the Jordanian capital, Amman. It is located in an area adjacent to the much older Temple of Hercules. It also contains traces of other civilizations that have succeeded in the city for thousands of years.

Ajloun Castle is one of the greatest examples of Islamic Ayyubid military architecture. The first stage of construction began ca.1184 by General Izzidin Usama, nephew of Salahuddin AL Ayyoubi, who built it on a hill 1100 meters above sea level.

The initial structure consisted of a compact nucleus stronghold with four main towers. Subsequent enlargements followed immediately with the addition of two more towers between 1184 and 1193 AD.

Between 1193 and 1218, during the times of AL Malek AL Adel, the second stage of construction was completed with enlargements by the castle governor Aybak Bin Abdullah. He added the seventh tower, which wraps around the southeast corner of the building.