Dead Sea, Sea of Salt Located in the Jordan Valley, and it is part of the Great Rift Valley which runs from East Africa to Turkey, Dead Sea is a small lake and remains of a giant inland lake. Lake Lisan was 200 kilometers long and approximately 200 meters deeper than the current level of Dead Sea. As it contracted, it left Tiberias Lake and Dead Sea, which at 408 meters below sea level is the lowest point on earth.

Dead Sea is known to be the lowest point in the world and the saltiest sea too. It has been named as Dead Sea because it contains the highest level of salt in the world that makes the water not suitable for any living creature to live in .

Near the northern end of the Sea, the water of the Jordan River flows into the Baptism Site, which may also be where the prophet lIyas ascended to heaven in a whirlwind. Near the Dead Sea there are Mountains of Moab and Mount Nebo, where the prophet Moses first saw the Promised Land, famously overlooking the Dead Sea. Mukawir, or Herod's Palace, also has a fascinating view.

The salt content of the sea is 20%, which means that it is the highest level, eight times the level of the world's oceans. This concentration contributes to the amazing buoyancy of the water and is a legacy of years of evaporation. The only life forms left in the Dead Sea are eleven species of bacteria. Many visitors around the world come to the Dead Sea to treat  and heal their bodies as the Dead Sea water is rich in minerals including (calcium, magnesium, bromine, iodine, and bitumen). These minerals are considered to be the most components  which are used at the medical treatment centres in the Dead Sea and other cities.  Even those suffering only from ennui can enjoy the high-quality spas in the area. In addition, due the unique depth of its location, the climate and quality of sunshine in the Dead Sea area is beneficial. Dead Sea salts and mud are known worldwide for their healthful properties. 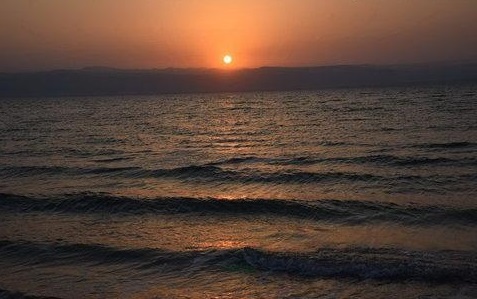 Many Beauty centers and factories are using the Mud of Dead Sea in many products because of its beneficial effects on acne and skin issues.

There are a number of tourist opportunities at Dead Sea, catering both for day trippers and people on a more relaxed schedule. The Dead Sea area is full of 4 & 5* hotels which are considered the best in the area like Marriott, Movenpick and Kempinski Ishtar, all these hotels are the best to offer many different services from using the private beach to having mud all over your body to have the full benefit. In addition to using the Spa and having a relaxation time to enjoy your full stay at the Dead sea.

Visitors to the Dead Sea cannot help but be impressed, whether their interests are piqued by the history of the area, the dramatic location or the novelty of reading a newspaper while floating in the water! There are many opportunities waiting to be explored here. But for all the fun, the fragile beauty of the Dead Sea will haunt you, calling you to return.

Visiting Jordan will not be completed if you don’t visit the Dead Sea and enjoy floating on the salt & warm water. Dead Sea is one of the most visited and important sites in Jordan & visiting it will add a good vibe to your tour and your stay in Jordan.

The Dead Sea visit is covered with the following Tours