Baptism site or Al Maghtas as its known in Arabic is considered one of the most holy sites for Christians in the World. Many people around the world come to Jordan to visit the Baptism of Jesus Christ.

Excavations at Wadi Kharrar accomplished after the 1994 peace treaty found evidence of a complex of churches, hermit cells and other buildings described in the writings of many pilgrims who have visited the site since the 2nd century AD. Now preserved as a tourist destination, al-Maghtas attracts many tourists the whole year.

In 5th and 6th centuries AD The Byzantines were inspired by the holiness of the site for Christians and built a monastery. This complex contained several churches, barracks for the monks, a caravanserai for pilgrims and an impressive water system. AI-Maghtas was part of the pilgrim trail that included Mt. Nebo and Jerusalem. The Roman Emperor Hadrian may have traveled here on his way from Petra in 129 AD. 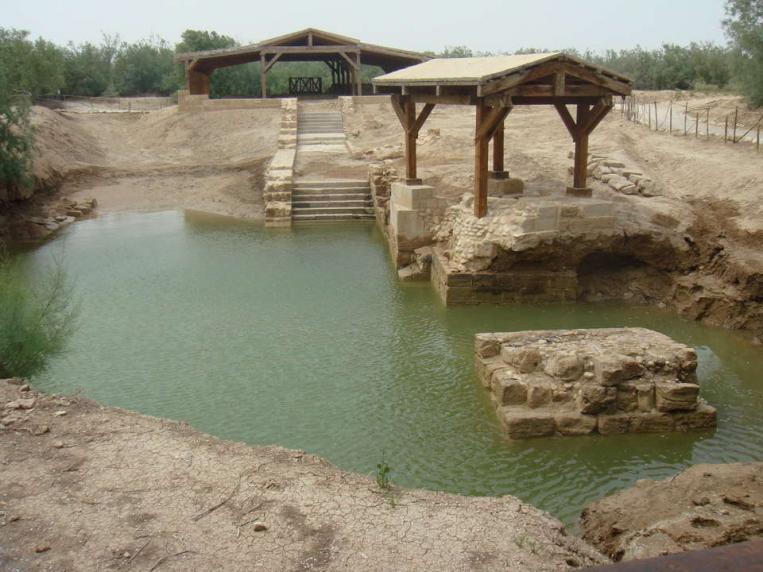 The geometric shapes and crosses decorating the mosaic interpret the iconoclasm of the early Christian church, which believed that figures should not be portrayed in art. The Western Church contained a rock-cut apse that extended under one of the pools. The oldest building, believed to be the Prayer Hall, may date from the beginning of the Byzantine era.

Baptism site was described as five miles from the Dead Sea as Tudius, a pilgrim to al-Maghtus in 530 AD said. And he talked about the unique church of Bethany, which was built on platforms in the early 6th century to prevent flood damage. He talked about a small hill too and clarified that it may be the place where Prophet lIyas was lifted bodily to heaven in a whirlwind. The most famous pilgrim in recent times, Pope John Paul II, called for blessings upon the Kingdom of Jordan, His Majesty the King, and all the people of Jordan, Christians and Muslims together, during his visit.

The Chapels of the Jordan River

The chapels built on the eastern side of the river during the Byzantine period (5th -6th centuries A.D), include three churches built over each other, and decorated with colored mosaic and marble flooring. A marble staircase links the three churches with “John the Baptist Spring” at the spot where it flows into River Jordan. A stone footing hosting a marble column with a metal cross on top is thought to be the actual baptism site of Jesus Christ according to different historians and travelers. A small chapel and remnants of a stone near the river were built over the spot where Jesus Christ supposedly unrobed before entering the water to be baptized by John.

A small square chapel instructed during the Byzantine era (5th -6th century). The floor is clad with a color mosaic and decorated with the cross symbol. The ceiling was erected over stone arches, and the chapel gate used to overlook a small atrium. The chapel was named after His Holiness Pope John Paul II in commemoration of his visit to the Baptism site in March, 2000 where he bestowed his blessing upon the vicinity.

This Fourth Century structure is considered the oldest prayer hall in the Baptism site. The floor is decorated with white mosaic, the entrance lies on the southeast end, the root was probably made from the wood, and two chambers to the northeast were appended at sides

Constructed on a cave during the 5th-6th centuries A.D. The cave was used as an apse (altar area). The ceiling was supported by arches, and the entrances were from the western and southern sides. The floor was clad with colored mosaic, of which only minor fragments survived. A human skull was found buried in a trench under the altar floor.

The unique architecture of this Byzantine Church comprises a nave, and a (altar area) of square shape. An entrance on his northern front leads to the monks’ living quarters. The colored mosaic floor is decorated with magnificent design. A Greek inscription at the center of the apse recognizes the founder of the monastery; through the grace and glory of Christ our Lord, this monastery was constructed by the God-loving monk. Rhotorics may God preserve him and bestow His grace upon him.

Today al-Maghtus is a beautiful site, full of peace. Along with other religious sites, such as Mukawir, Lot's Cave and Mount Nebo, al-Maghtus attracts pilgrims from all over the world, just as it has for centuries.

Today al-Maghtus is a beautiful site, full of peace. Along with other religious sites, such as Mukawir, Lot's Cave and Mount Nebo, al-Maghtus attracts pilgrims from all over the world, just as it has for centuries.