Umm ar-Rasas ancient name: Kastron Mefa'a, is located 30 km southeast of Madaba in the Amman Governorate in central Jordan, and is situated in the semi-arid steppe region of the Jordanian Desert. This rectangular walled city, located southeast of Madaba, lays in ruins, but several buildings in its eastern part, including churches, a courtyard with a well, staircases and beautifully curved stone arches have been excavated and restored. Recent excavations here have uncovered some of the finest Byzantine church mosaics in the Middle East.

Most of this archaeological site, which started as a Roman military camp and grew to become a town from the 5th century, has not been excavated. It contains remains from the Roman, Byzantine and Early Muslim periods (end of 3rd to 9th centuries AD) and a fortified Roman military camp. The site also has 16 churches, some with well-preserved mosaic floors. Particularly noteworthy is the mosaic floor of the Church of Saint Stephen with its representation of towns in the region. Two square towers are probably the only remains of the practice, well known in this part of the world, of the stylites (ascetic monks who spent time in isolation atop a column or tower). Um er-Rasas is surrounded by, and dotted with, remains of ancient agricultural cultivation in an arid area. 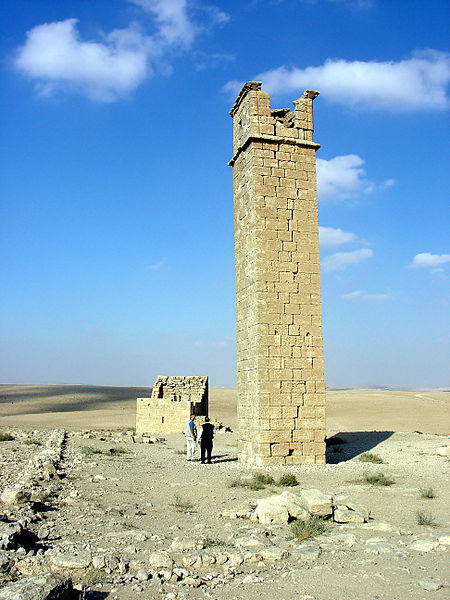 Particularly during the epochs of the Early Bronze ,Iron Age II, and Roman-Byzantine eras, dense populations inhabited the topographical regions beyond the western banks of the Dead Sea. Among these ancient settlements, the site of Mephaat has been mentioned in biblical texts as one of the cities upon the plateau to be condemned to great destruction, many branches of the King's Highway provided a means for reaching the more remote ancient cities, but the main route served as the forerunner for the Via Traiana Nova built by the Roman Emperor Trajan. This road with its many branches facilitated travel, and Roman military encampments were set in place along the way as a defensive measure against barbarian assaults across the Roman desert frontier known as the Limes Arabicus. Eusebius of Caesarea identified Mephaat as the campsite of a Roman army near the desert in his Onomasticon. Also, the excavation of a Byzantine church here exposed an inscription naming the area as "Castron Mephaa" further supporting the theory that Umm-ar Rasas and the biblical Mephaat are one and the same.

The Outstanding Universal Value of the site resides in the extensive settlement of the Byzantine/Umayyad period. These remains occupy the interior of the former Roman fort and also extend outside its walls to the north. They include the churches whose mosaic floors are of great artistic value. Further to the north, in a separate group of ruins associated with quarries and cisterns, is the uniquely complete tower accommodation of the stylite monks.

The lifestyle of the stylite monks is conveyed by a 14 meter high stone tower built in the centre of a courtyard adjoined by a small church (the Church of the Tower). A room at the top of the tower, accessible from a door on the south apparently reached by a removable ladder was the monk's living quarters.

The archaeology and inscriptions show evidence that monastic Christianity was tolerated and continued during the Islamic period of the 7th and 8th centuries and testify to the spread of monotheistic beliefs in the region.

The main attraction, though, lies outside the city walls: it is the newly unearthed Church of St. Stephen with its perfectly preserved remarkable mosaic floor, the largest one in Jordan. It contains the images and portraits of 27 Old and New Testament cities of the Holy Land from both east and west of the Jordan River and of Egypt, making it a discovery second only to the Mosaic Map of Madaba.Less than 2 km north of the fortified town, the highest standing ancient tower of Jordan puzzles the specialists: a 15 metre high, Byzantine square tower with no door or inner staircase, thought to be used by early Christian monks seeking solitude, now inhabited by swarms of birds. 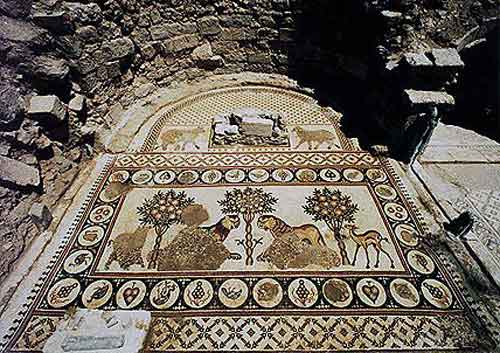 Criterion (i): Um er-Rasas is a masterpiece of human creative genius given the artistic and technical qualities of the mosaic floor of St Stephen's church.

Criterion (vi): Um er-Rasas is strongly associated with monasticism and with the spread of monotheism in the whole region, including Islam.