The Abbasid Caliphate was the third caliphate to succeed the Islamic prophet Muhammad. It was founded by a dynasty descended from Muhammad's uncle, Abbas ibn Abdul-Muttalib (566–653 CE), from whom the dynasty takes its name. They ruled as caliphs for most of the caliphate from their capital in Baghdad in modern-day Iraq, after having overthrown the Umayyad Caliphate in the Abbasid Revolution of 750 CE (132 AH). The Abbasid Caliphate first centred its government in Kufa, modern-day Iraq, but in 762 the caliph Al-Mansur founded the city of Baghdad, near the ancient Babylonian capital city of Babylon. Baghdad became a center of science, culture, philosophy and invention in what became known as the Golden Age of Islam. 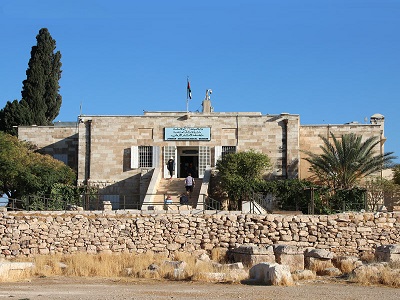 The Abbasid period was marked by dependence on Persian bureaucrats (notably the Barmakid family) for governing the territories as well as an increasing inclusion of non-Arab Muslims in the ummah (national community). Persian customs were broadly adopted by the ruling elite, and they began patronage of artists and scholars. Despite this initial cooperation, the Abbasids of the late 8th century had alienated both non-Arab mawali (clients) and Persian bureaucrats. They were forced to cede authority over al-Andalus (current Spain and Portugal) to the Umayyads in 756, Morocco to the Idrisids in 788, Ifriqiya and Sicily to the Aghlabids in 800, Khorasan and Transoxiana to the Samanids and Persia to the Saffarids in the 870s, and Egypt to the Isma'ili-Shia caliphate of the Fatimids in 969.

In many ways Islamic archaeology in Jordan began as a stepchild of the masterly presentation of the sequence of ceramics from Tell I:Iesban by James Sauer ( 1973). This research effectively replaced the earlier work of Paul Lapp (1961) and provided a systematic extension of this ear-lier model into the late, Islamic periods, as found at J:Iesban through 1971 and compared with known sites in Israel and Jordan. The chronol-ogy and cultural history deriving from this par-ticular archaeological interpretation gained a general currency in secondary literature on the history of these periods. The widespread accep-tance of this ceramic analysis thus yielded a detailed appreciation of the history of J:Iesban, and by extension that of central Transjordan. Sauer's contribution was a systematic data anal-ysis from an intensive archaeological program which laid the foundation for serious consid-eration of archaeological materials as part of regional history of these periods. The purpose of this paper is to discuss the relationship of the particular archaeological evi-dence at J:Iesban to the history of the early Islamic period, and in particular the Abbasid phase. The intensity of the research program at J:Iesban provides an opportunity to observe the interac-tion of historical ( documentary) and archaeo-logical (stratigraphic) artefacts. The intention is to examine the broader contextual situation of J:Iesban rather than critique the specific chrono-logical details (Whitcomb 1992). In this regard, discussions of details about individual periods have found some controversy, especially in the nature of the post-Period 4 gap: in other words, the fortunes of J:Iesban and other settlements during the Abbasid and Fatimid periods. The continuing assessment, a relic of information available in 1971, is that a period of abatement, in which there are no identifiable architectural or indeed settlement remains, continued from the seventh through the eleventh centuries (LaBianca 1989:241). Sauer has himself recently outlined a newer, very acceptable position (1994:264-68), one which deserves the impact of his original statement (see fig. 1). Consideration of the Abbasid period at J:Iesban as at any site should move beyond isolat-ing evidence present on the particular site. Fresh light on the problem of the early Islamic period comes by changing the focus from the archaeol-ogy of the site to the history of its region.

The historical background for the early Islamic period at J:Iesban prior to the excavations was sketched by summary of Vyhmeister (1968). Continuation of Christian occupation is attested through the presence of a bishop of Esbus in the mid-seventh century and a possible depic-tion on a mosaic of the same date (Vyhmeister 1968:170-71; see now Schick 1995:305-8). Vyh-meister next claims that this site is identical to Jabal Hebban mentioned in al-Tabari and destroyed in the conflicts of ca. 790 ( 1968: 1 71). One then jumps to the late twelfth century, when mention of the village of J:Iesban begins and becomes more frequent in the next two "episode" which Grabar discusses is the revolt of al-Faddayni during the reign of the Abbasid Caliph al-Ma)mun (813-33). The leader of the revolt, Said ibn Khalid, claimed descent from <Uthman ibn <Affan (the third Caliph and first of the Umayyad family to hold power) and attempted to rally Yamani factions to an Umayyad revival. Cobb (1997:173-74 and n. 73) has recently summarised this story with detailed information on the political and social contexts; specifically, he discusses this contention in terms of the strength of the Qaysi and Yamani tribal factions in author-ity of the Syrian cities, especially Amman.

The Archaeology of Jordan and Beyond