The four centuries of Ottoman rule (1516-1918 CE) were a period of general stagnation in Jordan. The Ottomans were primarily interested in Jordan in terms of its importance to the pilgrimage route to Mecca al-Mukarrama. They built a series of square fortresses—at Qasr al-Dab’a, Qasr Qatraneh, and Qal’at Hasa—to protect pilgrims from the desert tribes and to provide them with sources of food and water. However, the Ottoman administration was weak and could not effectively control the Bedouin tribes. Over the course of Ottoman rule, many towns and villages were abandoned, agriculture declined, and families and tribes moved frequently from one village to another. The Bedouins, however, remained masters of the desert, continuing to live much as they had for hundreds of years.

Population continued to dwindle until the late 19th century, when Jordan received several waves of immigrants. Syrians and Palestinians migrated to Jordan to escape over-taxation and feuds, while Muslim Circassians and Chechens fled Russian persecution to settle in Jordan, Syria, Iraq and Turkey.

The Ottoman period saw a general neglect of infrastructural development in Jordan, and what was constructed was usually with some specific religious orientation. For instance, castles such as Qatraneh were built to protect pilgrimage routes, while most schools, hospitals, baths, wells, orphanages and, of course, mosques, were built with a particular religious function in mind. The most significant infrastructural development of the Ottoman period was the Hejaz Railway from Damascus to al-Madina al-Munawarra in 1908. Designed originally to transport pilgrims to Mecca al-Mukarrama—the extension from al-Madina al-Munawwara was never completed—the railway was also a useful tool for ferrying Ottoman armies and supplies into the Arabian heartland. Because of this, it was attacked frequently during the Great Arab Revolt of World War I.

Classical Byzantine and Arab historical sources mention that the province of «Jund al-Urdunn», Jordan Legion, extended over the north of the actual Jordan and the north of Palestine. Its capital city was Tabariyya (Tiberias). It extended parallel to both legions of Palestine I and II, and all of them were perpendicular to the Mediterranean.

This kind of division ended with the crusaders occupation of the Levant, (Bilad al-Sham) coasts in the early twelfth century. A new divisional system was introduced, based on the «Niyabat» (provinces) or kingdoms. Niyabat Dimashq (Damascus) included Hawran, the north of the actual Jordan, Palestine, and Lebanon. The rest of Jordan became the Kingdom of al-Kerak, in the Ayyubid and Mamluk eras. The Niyabat was divided, for administrative purposes, into subdivisions, each of which was called Amal (sub province). So there was Amal of Barr al-Kerak, Amal al-Shawbak. Amal Zughar, and Amal Ma‘an. The north of the actual Jordan was part of Salkhad and Hawran region

After the Ottoman occupation of Bilad al-Sham in 1516/1517, almost the same previous divisions were applied to Transjordan. Niyabat al-Kerak became known as Liwa Ajloun, which was divided into Nawahi, (singular, Nahiya). Hence, there was the Nahiya of Ajloun, Bani Alwan, al-Kura, al-Salt, al-Ghor, Allan, al-Kerak, and Kerak al-Shawbak, besides those of Bani Kinana, Bani al-Asar, and Bani Jahma. Each Nahiya included several villages, communities and bedouin groups. Daftar Mufassal Ajloun, no. (T.D. 975) and Daftar Tabu, no. (T.D. 185), dated 1005 AH, 1596 AD, refer to names of villages and their habitats, and the population groups and communities, which included Muslims, Christians, and some Jews. The region enjoyed stability, thanks to its being the route of the Hajj Sharif (Pilgrimage) caravans toward Makkah (Mecca). The sultans and the walis (governors) of Damascus took great care of these caravans, they built castles and fortifications on the Hajj route, maintained the water sources and pools, and formed al Jarda (military patrols), to accompany the caravans and to protect them from the bedouins’ attacks, which could happen if the state did not give the bedouin tribes’ sheikhs (chiefs) their annual khuwwa (remuneration), or the Sultan’s surra (bourse), on time.

After the conquest of Damascus in 1516, the Ottoman troops of Selim 1st proceeded to Egypt, which fell in 1517. Thus, Palestine and Transjordan came under Ottoman rule for four centuries (1517-1918). The territory of present-day Jordan was then mainly covered by the sub-governorate (liwa’) of Ajloun, consisting mainly of the districts (nahiya) of Kura to the north, Ajloun to the south and Banu Alwan (Mi’rad) to the east, as well as the three northern districts of Banu al-A’sar, Banu Juhma and Banu Kinana, bordering the Yarmuk. The whole region came under the control of the province of Damascus. 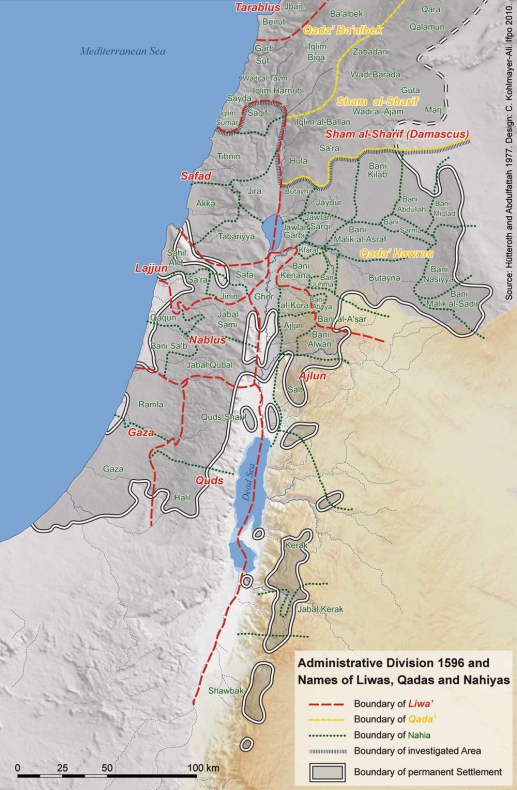 The Region of Ajloun

The Ajloun region corresponds in part to the former territory of Gilead, occupied during Roman times by the cities of the Decapolis. It was a wooded and mountainous country, producing cereals, favourable to the cultivation of olives (Ajloun oil was famous), it had always formed a refuge area for sedentary populations fleeing the attacks of nomads. It was called Jabal Jerash or ‘Awf, after the name of the turbulent tribe that occupied it during the Fatimid period (tenth century). The region was pacified by the Ayyubids (twelfth century) and a fortress, now known as Qal’at Ajloun, was built on the site of what is said to be a former convent. It played a role in the fight against the Franks. Partly destroyed by the Mongols, it was rebuilt during the Mamluk period (end of XII-XV centuries) during which Ajloun was a district of the province of Damascus. In the Ottoman era, the sub-governorate (liwa’) of Ajloun was the richest and most populous of Transjordan.

At the end of the sixteenth century, a tax inventory register (Daftar-i mufassal) tells us about the number of people and the economic activities of the sub-governorate (liwa’) of Ajloun, under the control of the province (wilaya) of Damascus. This register drew up an inventory of every village, listed the number of tax units (Khan = household) and taxes levied on agricultural and craft production. In the sixteenth century, Transjordan had about 400 villages with a population of about 35,000 people. In comparison, at the time Damascus had between 50,000 and 55,000 inhabitants.

The limit of the settled area roughly corresponded to the rainfall range of 250 mm to the east, the south and the hills overlooking the Jordan Valley. It was a more or less continuous line of border villages. Except in the south there were no isolated villages. Along with natural conditions, security played a decisive role in the establishment of villages. They were very small, 20 to 60 households, sometimes fewer. Among the larger towns, Ajloun, which was the most important, had four areas, and about 1,500 people; Kerak, 1,400, the majority being Christians; and Salt, about 300 people, 40% Christian. Amman is not mentioned in any register, the site was probably used as a wintering place for nomadic tribes.

Sedentary facilities which were few in the areas of Salt, Kerak, Jabal Kerak and Shawbak, were aligned on the crest of the escarpment overlooking the valley, taking their water from rainfall and springs located in the upper parts of wadis. Nomads were far fewer than the sedentary population; but in the district of Ajloun, they made up ¼ of the population. They were mostly nomads in the plains and steppes. In the Balqa’, tribes followed routes near the cliffs; those of the Shawbak region occupied the areas between the few villages. Some tribes which are important today, such as the Bani Sakhr, the Nu’aym, the Hasna (Hasma) and the Harbiyya were located in the same regions at the end of the century.

The period from the late nineteenth century is also well documented. The maps presented here were made up by Martha Mundy, a professor at the London School of Economics. She used data compiled when lands were registered by the Ottoman administration in the context of the reforms in the nineteenth century. At the time, two forms of land rights coexisted: the system of collective ownership (musha’) and private plots. With few exceptions, the musha’ system predominated in the plains, and individual ownership in the mountains. In wadi basins and the Jordan Valley where irrigation was present, land had a value higher than in the dry zones.

In the nineteenth century, the villagers of the Ajloun liwa produced cereals, wheat, barley, millet, and vegetables for domestic consumption. Cash crops differed across regions: in the plains wheat and to some extent lentils predominated; in the mountain villages, such as Tibna, there were mainly olive trees (olive oil) and vines (mainly as raisins). In the area along the northern border by the Yarmouk, Kafarât, large scale olive farming, initiated by entrepreneurs from Damascus but also locals, dates from the late nineteenth century. The breeding of goats and bees, which are not mapped because of lack of data, was ubiquitous, and represented a supplementary source of income for villagers. Animals lived outside, but they were sometimes kept in caves or in houses for safety. The village of Tibna, the largest in the Ajloun area, had 280 households. Its lands were amongst the most extensive; lands in the east had some 10,000 olive trees, owned individually on communal lands. Houses were made of stone or earth and generally had just one large room, with a roof supported by big arches. Family life often took place on a large platform above the penned animals to benefit from the heat.

If one compares the demographic situation of the nineteenth century with that of the sixteenth, the contrast is striking: population density has decreased significantly. The border of the cultivated area had declined westward, pushed by the advance of nomadic tribes, the density of villages had decreased in most areas, and the nomadic population had increased. Several reasons are suggested for this decline: the gradual decline of the administrative and fiscal organisation of the Ottoman State which began in the late sixteenth century; the introduction of tax farming (iltizam) which weighed more heavily in the countryside; and the strong monetary devaluation in the late sixteenth century which lowered the income of those who were paid in cash. This desertion of rural areas affected regions differently. The plateaus and mountains of Ajloun experienced relatively stable conditions (less than 20% of desertions). The regions that were completely abandoned were those near the nomadic border, along the escarpment of the Jordan River, and small areas south of Ajloun (approximately 50% of desertions). The sparsely populated south appears less affected by the phenomenon. In the last quarter of the nineteenth century a demographic recovery began at the same time as a recovery of land abandoned in the previous centuries.