Jordan is extraordinarily rich in archaeological remains of the Paleolithic period, largely because deflation has concentrated stone artifacts derived from land surfaces that have long since disappeared from the modern landscape and because, in many parts of Jordan, remaining Pleistocene land surfaces have not been buried by Holocene deposition, as is the case in Europe. The Levant, in general, and Jordan, in particular, also lie at the crossroads between Africa, Europe and Asia, so that periodic expansions or radiations out of Africa passed through the region, leaving behind thousands of prehistoric sites spanning from c. 1.5 mya (e.g., Ubeidiya, on the west bank of the Jordan River south of Lake Tiberias) to the Neolithic and later (Rosen 1997). Most sustained Paleolithic research in Jordan is confined to the Western Highlands, the Southern Mountain Desert and the Azraq Basin. Here, early archaeological sites are largely associated with lakeshore environments in areas with East African flora and fauna in what were grassland savannas over much of the Pleistocene (al-Nahar and Clark 2009).

During the Paleolithic period, the inhabitants of Jordan hunted wild animals and foraged for wild plants, probably following the movement of animals seeking pasture and living near sources of water. The climate during this period was considerably wetter than today, and therefore large areas of modern-day desert were open plains ideal for a hunting and gathering subsistence strategy. Evidence has also been found of Paleolithic inhabitation near a large expanse of water at Azraq. Paleolithic man in Jordan didn't leave any evidence of architecture, and no human skeleton from this period has yet been found. However, archaeologists have uncovered tools from this period such as flint and basalt hand-axes, knives and scraping implements. Ancient man also left clues to the nature of his existence beginning in Paleolithic times and continuing through the Neolithic and Chalcolithic eras.

Different studies of Hunter-Gatherers  in Jordan have associated settlement pattern types with mobility strategies. Binford (1980), in his general ethnographic study, has suggested two types of settlement systems: forager and collector.

Foraging systems in Jordan  were used by small groups with high seasonal residential mobility in their search for resources. Foragers do not store food for long terms; they gather it daily. They may send several individuals out to hunt. If they kill a large animal at a great distance from the group’s camp, they may process the carcass in the field and take back to the camp the processed meat. Thus, foragers may discard artifacts in two types of sites, the residential base camp and the «location» (an ephemeral camp) where extractive tasks are carried out (Binford 1980:5).

Collecting systems in Jordan were used by larger groups with less residential mobility, depending on logistically organized food procurement strategies and storage that are used because of temporal incongruities in resource distribution. Collectors use three types of sites: the field camp, the station, and the cache. The field camp is a temporal and operational center for a task group. The station serves as a place to observe the movement of game or other humans. The cache is a component of a logistical strategy for the storage of resources by small groups for future use by large groups (Binford 1980:10). In some situations the group combines the function of these site types in one site. The greater the number of generic types of functions a site might serve, the greater the number of possible combinations (Binford 1980:10). As a modal type, collectors are more logistically organized than foragers, and their movements around the area reflect greater activity differentiation and higher task specificity (Binford 1979; Shott 1990). 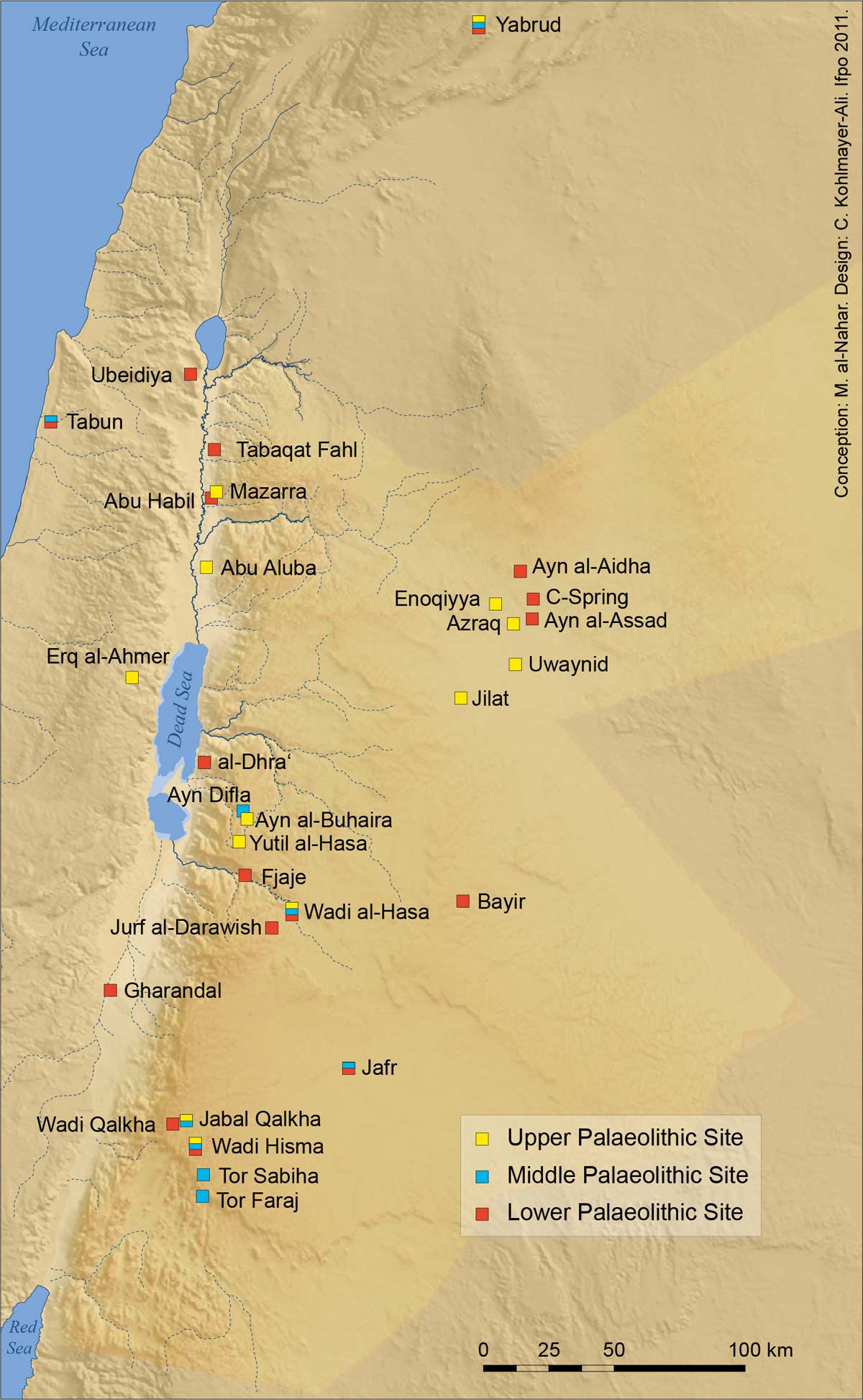 The Lower Paleolithic comprises the interval of time from the appearance of the earliest unequivocal stone artifacts late in the Pliocene to a vaguely-defined terminus sometime late in the Middle Pleistocene (c. 150-100 kya) and the hominins who lived during this period were called Homo erectus.

The most important Lower Paleolithic sites and other occurrences in Jordan are shown in figure II.1. The Lower Paleolithic Sites in the Western Highlands and southern desserts include (1) the Mashari‘ site cluster in the Tabaqat Fahl Formation, exposed in the Wadis Hammeh, Himar and Hamma, near Pella; (2) Abu Habil, some 15 km to the south; (3) the upper Wadi Zarqa, north of Amman; (4) Fjaje near Shawbak, in the Wadi Bustan, and (5) the Judayid Basin below the Ras al-Naqb escarpment, north of the port city of Aqaba.

Middle Paleolithic sites in Jordan span the interval from c. 150 - 45 kya and the hominins who lived during this period were the Neanderthals and towards the end of this period came the arrival of Homo sapiens (modern humans).

Although most of the Middle Paleolithic sites in Jordan are heavily deflated, some sites remain in situ, such as Ayn Dufla, Tor Sabiha and Tor Faraj Rockshelters in the Wadi al-Hasa, C Spring and Ayn Soda in the Azraq Basin, Abu Habil in the Jordan Valley, and various sites in the Jafr Basin, Wadi Hisma and Ras al-Naqb areas of southern Jordan.

They are defined techno-typologically as related to the Levantine Mousterian Complex with extensive use of Levallois technology (Olszewski 2008).

In the Middle Palaeolithic many of the above-mentioned locations were characterized by lakes, marshes and seasonal ponds with both arboreal (e.g., Quercus) and riparian vegetation (e.g., Cyperus). The early part of the Middle Paleolithic, based on pollen evidence from Ain Difla in the Wadi al-Hasa, appears to have been relatively cool and dry, although more moist than modern conditions in this region (Clark et al. 1997). For example, fauna assemblages from these sites include gazelle, equids, and ostrich at Tor Faraj (Henry 1995) and equids, caprines or ibex, and gazelle at Ayn Dufla (Clark et al. 1997).

Homo sapiens, or anatomically modern humans, lived and arrived in Jordan during the Upper Paleolithic period. In comparison to earlier Palaeolithic periods, Jordan has many in situ Upper Paleolithic sites. They are found either as open-air sites or rockshelters, such as Jebel Qalkha and Wadi Humayma in the Wadi Hisma, Ayn Buhaira open-air site and Yutil al-Hasa Rockshelter in the Wadi al-Hasa, Wadi al-Jilat 9, Uwaynid 18, and Wadi Enoqiyya in the Azraq area, and Wadi Hamma in the Jordan Valley.

Upper Palaeolithic sites in Jordan are attributed to the Ahmarian by the predominance of a blade/bladelet technology that emphasized the production of Microliths (such as Ouchtata bladelets) and al-Wad points, as well as different types of endscrapers and burins (Coinman 1998 and Olszewski 2008).

Archeological evidence in Jordan indicates that the climate during the early Upper Paleolithic was slightly moister than the late Middle Paleolithic. Conditions became drier throughout the Upper Paleolithic. Nevertheless, the appearance of the high water tables in the highlands increased spring flow and continued to feed numerous lakes, marshes and seasonal ponds here. In the Azraq Basin, faunal assemblage from Jilat and Uwaynid are characterized by steppe and sub-desert environments, but those from the vicinity of the Azraq Oasis suggest the persistence of nearby springs and tracts of marshland.