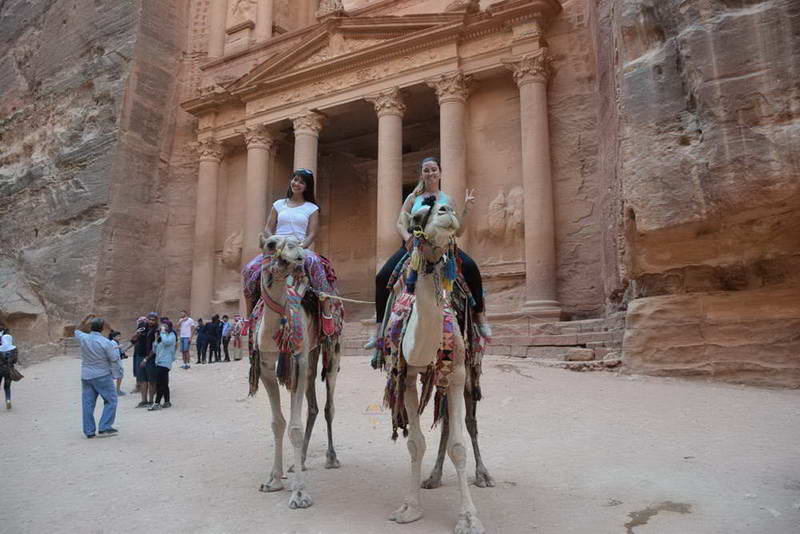 Explore Jordan’s natural wonders and ancient history on a 2-day private tour of Petra, Wadi Rum, and the Dead Sea. Travel by climate-controlled vehicle with an English-speaking driver as you explore Petra’s rock-cut architecture, go off-road in Wadi Rum and spend the night beneath the stars and enjoy an evening of Bedouin cuisine and culture and soak up the mineral-rich mud of the Dead Sea.

Morning departure from Amman via the desert highway to Petra – Wadi Mousa and start Petra tour by passing the marvelous Siq reaching The Treasury, and moving afterwards toward the Theater and Qasr-Al Bint , Return back to the visitors, the driver will be waiting for you and drive toward Wadi Rum, Spend the night, do the Jeep tour for 2 hours and move afterwards toward the  Dead Sea and finally back to Amman at the end of the second day.

Starting the first day tour by departing to the South of the kingdom to Petra. The Nabatean red Rose City of Petra that is considered one of the wonders of the world. A city 139 miles (225 kilometers) from Amman, carved in stone more than 2000 years ago in order to dominate the trade routes of ancient Arabia. Visit its towns, damns, and water channels.

You would start the tour by walking through the Siq, a narrow path of three quarters of a mile (1.2 kilometers), which is the main entrance to the city. At the end of the Siq, you will see the treasury " Khazneh" which is the local given name. The first view of the "Khazneh" is breathtaking. Other monuments you can see while walking through the main trail include the Amphitheater, the Royal tombs, the Great Temple complex, the Temple of the Winged Lions and Qaser Al Bint . Moving afternoon toward Wadi Rum.

Wadi Rum is called the valley of the moon where the movie Lawrence of Arabia was filmed. We were supposed to spend the night in a Bedouin camp, having dinner and some night activity , and the next day after breakfast , a short visit to Wadi Rum in a 4x4 jeep. Wadi Rum is a uniquely shaped massive mountain that rises amongst the rosy red sand of the desert with towering cliffs of various brownish, reddish and golden colors. Afterwards Moving toward the Dead Sea which sits 400 meters below sea level. The Dead Sea is one of the most incredible places in the world. It is known for the Biblical story of the destruction of Sodom and Amora, which was turned into salt. The Dead Sea speaks for itself; there is no living fish! It is by far one of Jordan's most impressive and spectacular places to visit. Its calm shining water glowing from its scorching sun above, is known for the concentration of salt and minerals which makes it a therapeutic as well as a unique swimming experience not to be missed! Free time to swim before returning to your hotel in Amman.

The city of Petra, capital of the Nabataean Arabs, is one of the most famous archeological sites in the world, it is Located 240 km south of the capital Amman and 120 km north of the red sea town of Aqaba, Petra the world wonder is undoubtedly Jordan's most valuable treasure and greatest tourist attraction, and it is visited by tourists from all over the world.

It is not known precisely when Petra was built, but the city began to prosper as the capital of the Nabataean Empire from the 1st century BC, which grew rich through trade in frankincense, myrrh, and spices.

Wadi Rum also known as The Valley of the Moon is a valley cut into the sandstone and granite rock in southern Jordan 60 km (37 mi) to the east of Aqaba; it is the largest wadi in Jordan. The name Rum most likely comes from an Aramaic root meaning 'high' or 'elevated'.To reflect its proper Arabic pronunciation, archeologists transcribe it as Wadi Ramm .

Located in the Jordan Valley, part of the Great Rift Valley that runs from East Africa to Turkey, the Dead Sea is the remains of a giant inland lake. Lake Lisan was 200 kilometers long and approximately 200 meters deeper than the current level of the Dead Sea. As it contracted, it left Lake Tiberias and the Dead Sea, which at 408 meters below sea level is the lowest point on earth.

The salt content of the sea is 20%, eight times the level of the world's oceans. This concentration contributes to the amazing buoyancy of the water and is a legacy of years of evaporation. The only life forms left in the Dead Sea are eleven species of bacteria. The waters are rich in minerals, including calcium, magnesium, bromine, iodine, and bitumen. All these have healing properties that can alleviate or ease allergies, skin rashes, bronchial irritations or glandular conditions. Visitors come from all over the world to ease or cure their conditions at the medical treatment centers at the Dead Sea. Even those suffering only from ennui can enjoy the high-quality spas in the area. In addition, due the unique depth of its location, the climate and quality of sunshine in the Dead Sea area is beneficial. Dead Sea salts and mud are known worldwide for their healthful properties.